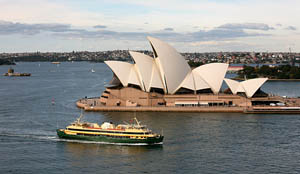 If you choose to be in the cold instead of the heat, particularly if you are looking forward to break free from the northern summer, then the ideal time to go to Sydney would be during the winter (June to August, including). The winter of Sydney is not actually harsh and the weather is typically pleasing. It is ideal for wandering the city or for bushwalking.

Since the city is considered as one of the great holiday locations in the world, it offers a countless of winter getaway alternative. The temperate winter weather of New South Wales guarantees the famous harbor, lively food scene and dynamic cityscape that is great all year round. Thus, make the city a perfect location for a winter trip.

Sydney International Film Festival – Established in 1954, this event is now deemed as the longest running and most prominent festivals of its kind in Australia. Not just presenting the finest in films from the country, this event also shows films from directors coming from different parts of the world with approximately 200 fresh films shown every year. During the festival, actors, filmmakers, film fans and other business professionals could enjoy an activity that incorporates screenings, parties, red carpet events, film workshops and awards ceremonies. Animations, documentaries, experimental works and fiction films all find have a place in the events as well as discussion forums and debates play a significant role in this festival. Sydney International Film Festival will take place from June 1 to 30, 2010.

Henry Lawson Festival of Arts – This event is yearly celebrated and has continued to promote and achieve acknowledgment for Australian aspirants in different areas of arts like art, photography, song, shot story, television and verse. Also, children are given the chance to work on their skills. To accommodate all interests and tastes, this long weekend event incorporates bikes and cars, awards dinner, guinea pig races, concert on Friday night, market stalls, street activities, school drama day, poetry readings and a lot more.

Darling Harbor Jazz and Blues Festival –Celebrated over the birthday weekend of the Queen, this event brings soft sounds to the waterfront of the city with a series of presentation fro swing bands, gospel choirs and soloists. Darling Harbor Jazz and Blues Festival will present the finest of blues, gospel, groove, jazz, New Orleans and Swing. There will also be a jazz workshop with famous musicians that provides anecdotes and tips about the industry.

June is actually the start of winter in Sydney. Generally, the winter in this city is known to be fairly dry and mild. In fact, sunny winter days could be very pleasing and adequately warm.

Generally, you will find the highest price in airfares during summer and it is on its lowest in winter. So, since June is winter and Sydney, it means that the season is not on its peak. This does not mean though that it is okay to book your flight to Sydney on the time of your departure. In fact, during low season you might be able to have a problem on last minute airfare deals. Therefore, it is still ideal to book your flight in advance.

Sydney has a broad variety of accommodation to cater every taste and budget. There are 5-star hotels near the harbor, budget Sydney hostels by the coastline or in the business district, affordable backpacker hostels, self contained apartments and boutique hotels.