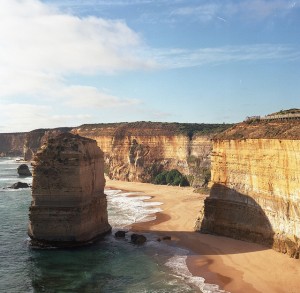 If you’ve reached Australia in January, then you’ve made it here in the middle of the summer months. The country is coated in sunshine. Because of the sheer beauty of the season, cheap flights to Australia will be harder to find. However, if sunshine and more sunshine is what you’re after, then hopping on a plane at this time of year will be worth the cost.

You can do just about anything during this time of year, from visiting beaches to trekking the Outback. There’s always a good Australia tour to choose from. As for accommodation, the hotels in Australia will be a bit more packed than normal, so make plans well in advance.

When it comes to the weather in Australia, there can be significant differences from north to south. Just have a look at Darwin versus Hobart below. You’ll need to take your main destination into consideration when planning your Australia holiday.

Sydney New Year’s Fireworks
Sydney is known for its killer fireworks display every New Year’s right off the Harbour Bridge. Locals will gather in the prime vantage points for hours in advance, counting down to the new year.

Australia Day
January 26th marks Australia Day down under. It’s a great time to catch up with mates and have a barbie. This is one public holiday that cannot go uncelebrated.

Sydney Festival
The Sydney Festival takes place for around 3 weeks in January each year. It features art, music and dance throughout the city.