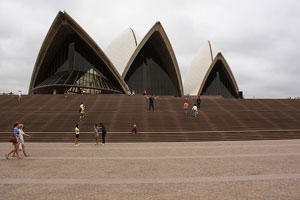 Vacationers in Sydney always find summer the ideal time to travel. It is when the climate is warm and outdoor activities are well under way and big events and festivals are creating a noise around the city. Since the temperature really never gets cold, there is a big chance to do a lot of activities during this time of the year in Sydney.

Chinese New Year in Sydney – Chinese New Year is celebrated in Sydney for almost 6 weeks. The event features a delightful twilight parade, oriental markets and the traditional dragon boat races. In the midst of the Chinatown, you can find Dixon St., a place where a variety of decorations rivals. This event is held form January 23 to February 15, 2010.

Sydney New Mardi Gras – This is a world-renown celebration because of its month-long of parties, music, exhibitions, plays, literature and art, all conveying the importance of the meaning of being gay in this modern world. The event will also present a parade that will be shown in March and it will display all over the city one of the most remarkable street events you would ever wish to see. The event will start from February 15, until March 7, 2010.

Tropfest – This event is regarded as one of the most iconic cultural festivity in Australia and the biggest short film festival worldwide. The event is also famous for its part in the development in film industry in the country by giving special platforms for up and coming filmmakers through its initiatives and events and new spectators for their work. Tropfest has been attracting live national viewers of over 150,000 in just one night. This event is hosted by the Domain of Sydney in the Royal Botanic Gardens with live satellite connections to Adelaide, Brisbane, Canberra, Hobart and Perth.

Twilight at Taronga Zoo – This year’s event will be celebrating its 15th years. There will be a summer concert series, so be prepared for the party! The event will be sizzling with outstanding range of local performers burning up the stage of the Taronga Zoo each week end starting from February 1 until March 31, 2010. Twilight at Taronga Zoo will display the finest of the city in summer. So, come with your friends and feel the excitement of an alfresco night show in the natural surrounds of the Taronga Zoo.

Generally, summer in the city of Sydney is sunny and hot although there is a chance of high rainfall.

Summer in Sydney is probably the best time to go to the beach and enjoy the magnificent climate of which Sydney has become popular. In general, summer days in this city enjoys an average 8 to 9 hours a day of sunshine. The sun during these times could be very strong so protect yourself with a sun block and a hat and never spend so long.

>> read more about weather in Australia

A lot of airlines go to Sydney and the prices range considerably, thus it pays to look around for a flight to Sydney and find some deals. Think about the length of flight as well as any obligatory stopovers. Begin by contacting the top airline or your local Australian travel agent to know about any good deal during such a peak season.

You will be indulged in options with Australian accommodations. Sydney has boutique hotels, self-serviced apartment, luxury resorts, camping as well as hostels. You can anticipate a friendly and quality service in any budget variety you select.