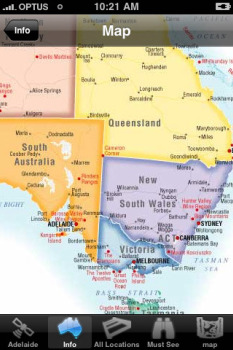 The notion of having the “world in your pocket” used to be limited to describing books that took you far away from wherever you were – but these days, with tools like the iPhone, you really can take the world with you when you travel. And it’s more than just fun for travel gadget geeks – carrying guidebooks to several cities on one little device takes up a helluva lot less room in your suitcase than carrying each of those actual guidebooks.

And when you see the cool Australia iPhone apps listed below, you’ll be even more excited about having an iPhone with you on your trip to Oz.

The apps below are broken down into three categories – you’ll find Australia travel iPhone apps, apps that will help you with the local lingo, and apps that are just plain fun. There are apps being added to the iTunes app store every other second, it seems like, so the possibility exists that yours isn’t here. If there’s a great app for travel in Australia that isn’t listed here, please let us know in the comments section below.

Lonely Planet City Guides
$7.99 each
Lonely Planet publishes some of the most popular guidebooks, and since they’re based in Australia it makes sense that they should be good at covering their own stomping grounds. These apps have everything you’d expect from an LP book (although I do find them a bit cumbersome to navigate), and the Australia cities you’ll find in the app store are Brisbane, Melbourne, and Sydney.

Australian Travel Guide
$1.99
This app covers all of Australia, with more than 10,000 points of interest located throughout the country. It includes listings for accommodation, and you can search either by your interest area or use your iPhone’s GPS to find what’s nearby.

Oz Weather
$1.99
This app is handy whether you live in Australia or are traveling through – it includes weather forecasts for cities all over the country.

100 Best Places To Go – Australia & New Zealand
$0.99
If your trip includes both Australia and New Zealand, you’ll find this app particularly handy. It’s a list of what one guide has determined are the 100 best places to go across both countries.

Queensland
FREE
This app comes right from the Tourism Queensland people, and includes listings for accommodation and attractions as well as tour operators working in the state.

OutbackNT
FREE
The “NT” in this app refers to the Northern Territory, and the app is produced by Tourism NT, so it’s the app to have if you’re visiting the outback.

Sydney Australia
FREE
Despite the city-specific name, this app was developed in conjunction with Tourism New South Wales. So although it doesn’t have state-wide information, it’s still a great app to have if you’re visiting Sydney.

Sydney Bars
$1.99
This app is a guide to more than 200 of Sydney’s best bars, which you can find by alphabetical listing or (using your iPhone’s GPS) see which ones are closest to where you are. Updates of new bars are free.

Help! Finder Australia
$1.99
We hope that you never have to use this app, but then again – it’s nice to know it’s there if you need it. This one will find the nearest police station or emergency department anywhere in Australia.

Metro Sydney
$2.99
This app provides public transportation information for Sydney. You can look up any route’s timetable, find the stations nearest you, and (if you turn on your network connection) the app will also give you up-to-date timetable information.

Metlink Melbourne
FREE
This app provides transportation information for Melbourne and beyond – you’ll get information on trams, trains, and buses throughout the state of Victoria. You can look up any route’s timetable, get live tram updates, and find the closest stops to where you are.

World Nomads Australian Language Guide
FREE
You’re reading an English-language website, you’re pretty sure you understand what’s being said, and last you checked they spoke English in Australia. So why the need for a language section in an iPhone apps article? Because this app covers Australian slang.

Outback Guide
$0.99
Even more specifically, this app is all about terms that are used in the Australian outback – and, according to the app’s developers, not necessarily much further than that. Useful? Maybe not. But definitely fun.

The Aussie Slang Quiz
$1.99
Now that you’ve downloaded and mastered the two language apps listed above, why not give this Aussie slang quiz a try?

Nano Facts – Australia
$0.99
Want to study up on all the basic information about Australia before you get there? Or just annoy your friends with random Australia factoids? This is the app for you.

Oz Quiz
$0.99
With more than 600 unique questions in this app, your knowledge of Australia is sure to be tested.

Australia!
$2.99
This app is full of gorgeous images from all over Australia – it’s sure to have you counting down the days until your Australia trip, or drooling over the prospect of planning one. (Just don’t drool on your iPhone.)

Australia 24/7 News
$0.99
Take the Australian news with you wherever you go with this app – it pulls from 14 different news sources in the country. It’s not TV news, but news stories you can tap on and read. It does require an internet or network connection to update with the latest news.

Backpacking Australia
$4.99
This app lets you watch all the episodes of a fun show that followed a group of travelers around Australia. It’s one part travel show, one part extreme sports show.

Radio Kangaroo
$0.99
This app gives you access to more than 80 Austrlian radio stations (it does require a network or internet connection), and the developers got all cutesy with a kangaroo icon that jumps when the radio is streaming and that you tap to make it start/stop.

Tour Down Under
FREE
If you’re a fan of the Tour Down Under cycling race – or you’ll just be in Australia while the tour is going on and want to know more about it – this free app is the one to download. You’ll get live race updates, exclusive video and photos, and team information.

Oz Citizenship Free
FREE
Among other things, this app includes the Australian national anthem – which you learn “with the help of the jumping kangaroo.” So even if you’re not trying to get citizenship in Australia, that alone might be reason enough for downloading this app.

iFlag Australia
$0.99
Bring the Australian flag with you wherever you go with this app – and it’s interactive, so a tap of your finger makes the flag move and sway in the “breeze.”

DrinkTracker Breathalyzer
$1.99
This app is being categorized under “fun” because it’s kind of amusing (and because there’s really no way you’re going to be doing the calculations required to keep track of your blood alcohol content if you’re on a pub crawl in Sydney), but it’s actually kind of useful as well. Of course, since you’ll be blotto, you might want to give your iPhone to the designated driver so they can punch in the numbers to figure out everyone else’s blood alcohol content all night long. Lucky them.