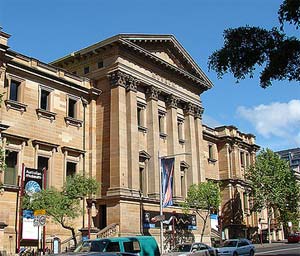 Beaches, surfing and spotting a kangaroo may inspire a trip to Australia, but should the weather turn rotten, or if you find staring at the ocean for days on end just a bit too boring, there are some fabulous diversions in Sydney.

The largest city in the country—also continent—of Australia is world famous for the Sydney Opera House and Sydney Harbour Bridge, but there are also smaller delights to be discovered. One is the Australian Museum (6 College Street). Housed in a stately building, it focuses on the natural history of Australia. For a country that has the koala bear, kangaroo, platypus, wombat and most of the deadliest snakes in the world, Australia trumps other countries for natural history, which gives you plenty to discover at this museum. Not only does the Australian Museum have extensive exhibits on animal life, but there are informative exhibits on minerals, biomes and human life—specifically indigenous Australians. The Australian Museum takes all of the iconic images of this huge country and elevates the average visitor’s knowledge so that you can return home knowing that an average Australian backyard contains more reptile species than all of the United Kingdom.

If your inclinations lean towards the more modern stories of Australia, then a visit to the Powerhouse (500 Harris Street) is a must-do. Hands down the Powerhouse rates high for packaging social history along with science, technology, and even a little bit of fashion. Permanent exhibits include complex clocks, the first steam engine that ran between Sydney and Parramatta, and an exhibit on design through time. The Powerhouse often has traveling exhibits and currently many of Princess Diana’s belongings are on loan to the museum.

Although the Great Barrier Reef is one of the most famous environments in Australia, access is mostly from Cairns, a city 2870 km from Sydney (that’s 1783 miles, or about the distance between Denver and New York City). Australia is huge, almost the size of the lower 48 of the United States, so if a trip up to the Great Barrier Reef is out of your reach, a trip to the Sydney Aquarium (Aquarium Pier, Darling Harbor) makes a fine substitute. It features the world’s largest Great Barrier Reef exhibit. There is also a crocodile exhibit complete with cheeky signs warning you not to lean into the exhibits because “If this fall does not kill you, the crocodile will.” You’ll also enjoy walking through huge underwater tubes that allow for shark viewing and seeing giant sea turtles floating in their marine environment.

Across Darling Harbour from the Sydney Aquarium is the Australian National Maritime Museum (2 Murray Street). Next to the building, the HMB Endeavour, a replica of Captain Cook’s ship, stands ready, looking as if it’s waiting for the crew to return. This modest-sized museum features the stories ranging from Australia’s exploration by the British to the country’s current role in maritime commerce. And after shelling out plenty of dollars for the aquarium, wandering through this free museum is a welcome diversion.

So take a few hours away from the beach to visit some of these cultural, historical and scientific attractions. The change from sand and surf will help you appreciate some of Australia’s other offerings.

About the author: Loey Werking Wells is a freelance writer based in Portland Oregon. In 2005-2006 she traveled around the world with her husband and then eight-year-old daughter. They visited 28 countries, slept in 101 different beds, and ate Mexican food in Cork and Korean food in Prague. She is currently working on a book about their adventures as well as writing for various web sites. Her travel blog is https://only-planet.blogspot.com