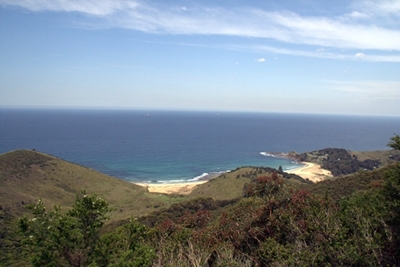 It is always refreshing to meet someone that is passionate about what they do.

We sat outside the Garie Beach YHA in the middle of the night, turned the flashlights off and just listened. It was us and nature, and nothing else for miles. We waited for our eyes to adjust and that’s when Andy presented an impromptu soliloquy on just how amazing it was to be secluded in the Royal National Park at that moment. Even the sight of the YHA structure was something out of place to him, and if he had his way (if the rain didn’t start), he would have just stayed outside the entire night.

I can appreciate nature, but it is just plain eye-opening to be with a tour guide that can put it all in a different light. 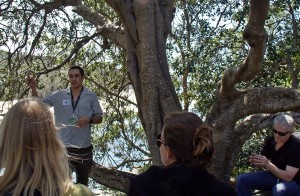 Andy Richards is the owner and main tour guide of Understand Down Under (UDU), an eco-tour company that focuses on day-trips to the Royal National Park just south of Sydney. The main part of the tour will take you through to the best parts of the park, including beaches, bushwalks and look-outs. You’ll hear stories of the Dharawal Aborigines, historical references since European discovery and then some. And, let’s not forget about the traditional boomerang and spear throwing, visits to Stanwell Park, the Grand Pacific Drive and Sea Cliff Bridge.

You could almost say this is the most Australian thing you can do if you only have a short time in Sydney, or the country for that matter. While the Blue Mountains seems to be the go-to day-trip option from Sydney, the Royal National Park should not be overlooked as it can provide the beach, the sun, the rainforest and the tranquility in one package. There is an entire world to discover there, and it helps that anything outside the park feels miles away.

>> See other day trips from Sydney

Some Photos From the Day

Did you know that the Royal National Park is the second oldest national park in the world?

I was lucky to be a guest on a tour that also included the added option of an overnight at Garie Beach. In the summer, this specific option can be booked up to 3 months in advance, so it is safe to say it was pretty special. We had a view of the beach from the bedroom windows – which once opened let the soft ocean sounds permeate the air — but we were so far up a hill that the seclusion of the location was able to set in. Were we really still so close to Sydney?

If interested in experiencing the Royal National Park through the eyes of a passionate tour guide, have a look at the UDU website. They also offer a night tour, called a Moonwalk. You can read a great review of that over on yTravel Blog.