Get Out of Sydney: Take a Day Trip to the Blue Mountains and Jenolan Caves 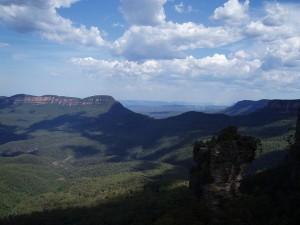 It’s no lie that Sydney is an amazing city, but sometimes we just need to get away from the big city stress and noise, even if just for a day of peace. Luckily there are a number of day trip options from Sydney, including the spectacular Royal National Park to the south, Hunter Valley to the north and the Blue Mountains to the west.

Choosing a getaway to the Blue Mountains is a popular decision, but who doesn’t like a retreat to the mountains, especially when they are only 50 kilometers away? The weather can be cooler, and the scenery is just so different from the city that you can finally get a fresh breath of air (not that Sydney is polluted or anything). There’s just something therapeutic about being surrounded by the feeling of seclusion.

A day trip option to the Blue Mountains generally involves the mountains themselves, Katoomba and the Jenolan Caves.

The Blue Mountains are named so because the landscape takes on a blue tinge. The reason for this is often said to be the reflection of sun off of the eucalyptus oil from the trees, but the exact reasoning might just be a natural phenomenon that pretty much applies to most distant objects. No matter how it happens, it is still an amazing site to be standing at an overlook stretching for kilometers in the distance until the blue finally takes over the image.

One popular overlook in the Blue Mountains would be that at The Three Sisters. The Three Sisters is a rock formation, brought about by natural erosion over time, that is situated not too far from Katoomba, overlooking the Jamison Valley. This formation is part of an Aboriginal dreamtime story, in which the names for the sisters were given: Meehni, Wimlah and Gunnedoo.

Katoomba is probably the most popular mountain town in the Blue Mountains, although there are plenty of other amazing little towns to visit in the area. Wentworth Falls, for example, is a popular town that is famous for its bushwalks and scenery that it provides access to.

The reason Katoomba stands out is because of the fact it is the busiest with more restaurants, hotels and hostels than the others. I quite like Katoomba and found it to be an interesting mix of trendy and alternative culture, which one wouldn’t really suspect when heading to this part of New South Wales. The train will drop you in Katoomba, and it is here that you can pop on a sightseeing bus to transfer to the Jenolan Caves.

Katoomba Dining Tip: The cafe culture is big here, so you won’t have to look hard for a nice place to grab lunch. But, if you can stay for dinner, then I highly, highly, highly recommend Gustissimo for the most amazing northern Italian food in Australia. We kindly joked with the waiter as to whether or not he had an old Italian woman back in the kitchen, to which he replied, “Oh, that’s my mother.”

The Jenolan Caves are located a 45 minute drive outside of Katoomba and feature a number of open cave tours throughout the day. The caves cover about 40 kilometers of space, and new caves are still being uncovered to this day. Tours vary in lengths depending on the cave, or the activities involved (abseiling and adventure caving are options).

The tour I did recently was of the Temple of Baal, a glorious cave with many biblical references in its story. It was discovered over 100 years ago and is still seen as one of the most spectacular caves on offer.

Getting to the Blue Mountains & Around

Driving: You can easily drive to and around the Blue Mountains if you have a vehicle (you can always rent a car). It takes about an hour and 45 minutes to reach Katoomba from Sydney taking the Great Western Highway.

Train: A train to Katoomba is an easy option for those that don’t have a car or who would otherwise like to avoid driving in Australia. The ride takes only 2 hours via CityRail, which also combines the ticket with the option of having day access to the hop-on, hop-off Explorer Bus once you’ve arrived. There are several options available, so have a look at their official site for more details.

Once in Katoomba, there are taxis and the Explorer Bus to take advantage of. The Explorer Bus in particular will take you to up to 30 of the sights around the Blue Mountains.