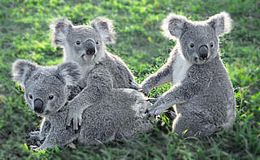 Care to cuddle a koala? There are a couple of opportunities in the Sydney area and up around Brisbane. The Koala Park Sanctuary in Pennant Hills is reachable by car, train and bus from Sydney. Horrifying to most, during the 1920’s , there was a growing export trade in Koala fur. One man,Noel Burnett, was alarmed enough by the rate at which the Koalas were being culled, he opened his very own Koala sanctuary.
The sanctuary lives on and has grown to include most of the iconic Australian wildlife including wombats, Kangaroos and the most adorable of animals- the fairy penguin. Sheep sheering, koala cuddling, and informative animal presentations are a few of the highlights of the animal park. Bring a picnic, see a bit of the native tall eucalypt forest and relax in the Australian bush that is only 30 minutes outside of the city. Open 7 days 9-5. www.koalapark.com, 02 9484 3141
A few other places to cuddle a Koala in Australia.