Day 2 of my Cool Dingo Fraser Island tour started early and was packed full of some spectacular stops. It was a day a little more of what you might expect when you think of the island as it was when we ventured up and down the Seventy-Five Mile Beach.

>> Read about Day 1 of the Fraser Island adventure first.

Breakfast was at around 7:30 am at the Dingo Bar. Eggs, bacon, toast, cereal and fruit are on the menu, and like all the meals, you can eat as much as you want. I went for the coffee… lots of it. I knew we had a big day ahead of us, so I wasn’t going to waste it being tired. 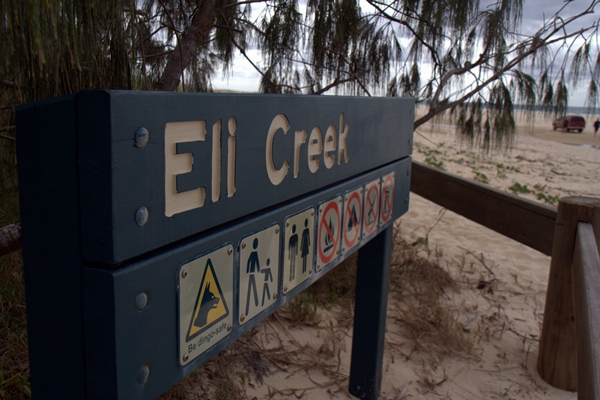 Our first stop of the day was at the pristine Eli Creek, a place that gives you both the beach view and the creek experience in one. The water is a bit chilly for an early morning dip, but it is definitely a possibility if you’re brave enough.

Eli Creek is known as the east coast’s largest creek, and it pours liter upon liter of freshwater into the ocean. It’s a great stop-off for swimming and having lunch, and there are even toilet facilities in the area. Besides that, the serene beauty of the creek makes it a favorite to many visiting Fraser Island. 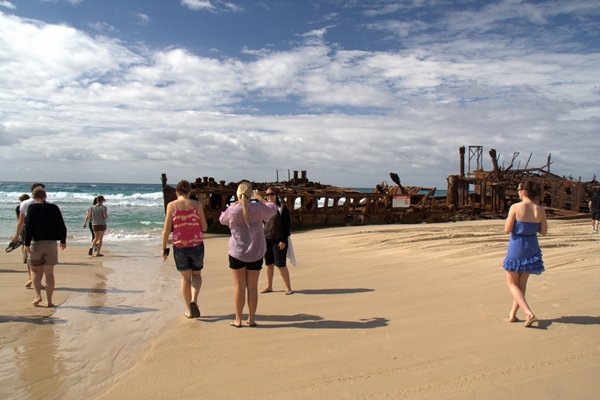 The remnants of a ship sits on the Fraser Island beach, slowing rotting and rusting, but adding just that extra bit of character to make it so cool. It was brought to shore because of a cyclone in 1935, and it is an excellent photo stop on the tour.

Up close, you can see the barnacles that have taken over. Be careful, though, as it is rusty metal. I’d recommend keeping a safe distance unless you’ve had a recent tetanus shot. 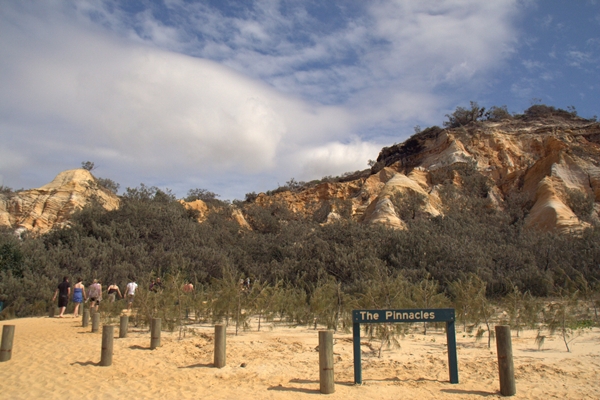 The Pinnacles are like a painting. These sand cliffs and walls feature mainly the red-orange, yellow and white sands, striped and shaped from the blowing of the wind. It is a clear example of the natural forces that helped to create Fraser Island itself. 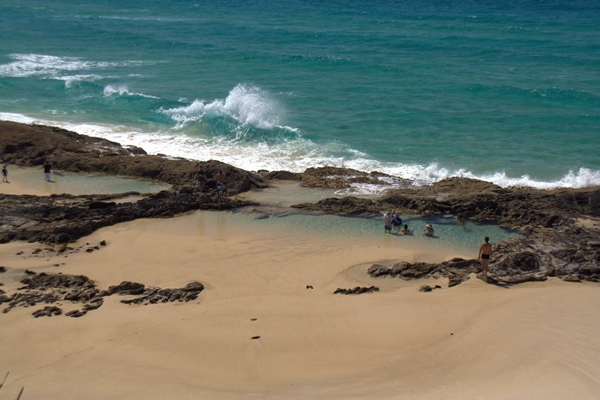 The Champagne Pools are great because they give you the ability to sit in sun-warmed pools that are protected from the sharks and other unknowns of the ocean.

A rocky wall helps to produce the pools, and they are also home to crabs and other interesting creatures if you take a look around. If lounging in the water isn’t your thing, it is also just as fantastic to sleep on the beach. Just remember to wear some foot protection when near the pools as the rocks are very, very sharp and slick. 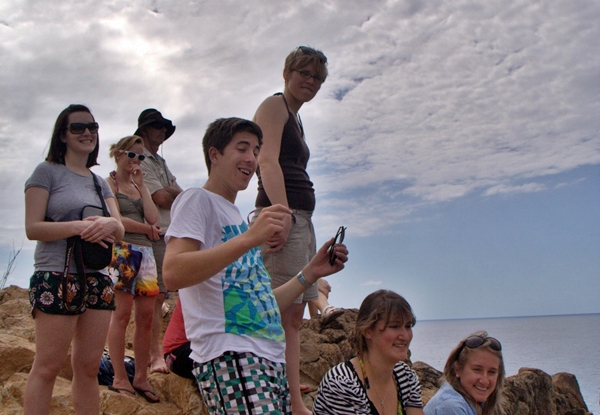 The time spent on the top of Indian Head was definitely my favorite part of the entire Fraser Island adventure. Already cool enough on its own, for the 45 minutes or so we spent at this location, Fraser Island turned into an episode of National Geographic. While gazing out over the ocean, we saw pods of humpback whales making commotion, several groups of dolphins cruising about, sea turtles, sharks and sting rays doing somersaults. I almost had to pinch myself to believe it was all happening at the same time. The only thing that could really get us all to come down was the fact that lunch awaited us. 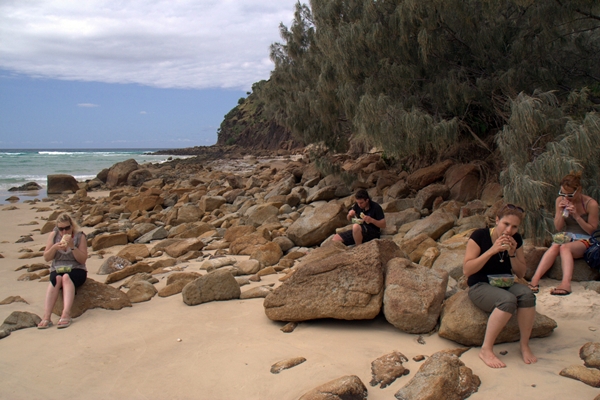 Our buffet lunch was set on the beautiful beach right nest to Indian Head. It featured pre-made containers of salad, fruit, veggies and chicken, which we could eat as is or make up a nice wrap. We washed it all down with some juice, tea and coffee, and there was definitely the endless supply of cookies and muffins for dessert. 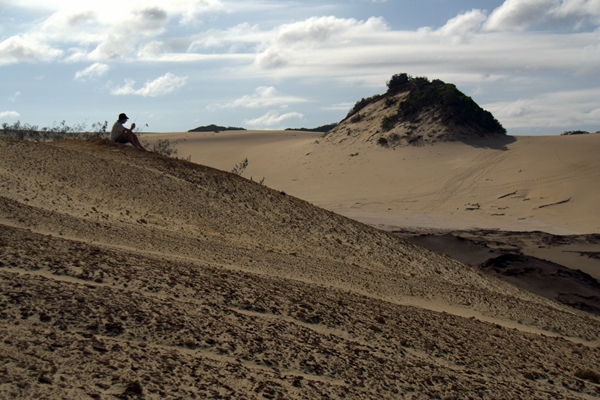 We had a bit of time to spare, so Ranger Dave took us to one of his favorite places on the island, the Kirrar Sandblow. It was a giant sand dune with areas of pure white, and others that were striped with yellows and reds.

Being there felt like we were walking on another planet. I chose to perch myself on top of a high dune while some of the more energetic members of the tour group decided to climb all the way up another (that was pure loose sand) just to run down it. Some just ended up tumbling a bit in the process. I kind of think I had the win in that situation.

From the top of the dunes, you can get a nice view of the ocean nearby. It’s a peaceful setting, but not unlike that of every other place on Fraser Island. 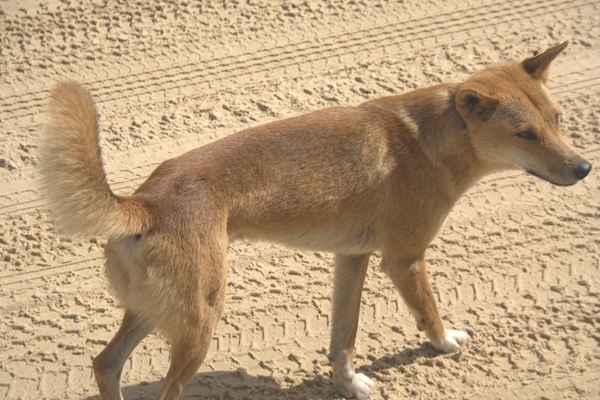 Much of the day’s activities involved using the Seventy-Five Mile Beach “highway” to get there. It is a place where we ran into dingos and saw plenty of fisherman hoping to get a giant catch.

Back at the Dingo Bar, we indulged in our last buffet meal of the 2-day adventure. It was a good time to hang out with the tour group one last time, and even have a nice chat with Ranger Dave. We were shuttled to the ferry, and finally taken by bus to our accommodation back in Hervey Bay.