From the time I arrived in my hostel in Sydney back in early 2009, I had heard, read and seen about Cool Dingo Tours, so it was a big treat to be able to partake in one of their amazing tours on the great Cairns to Sydney road trip. 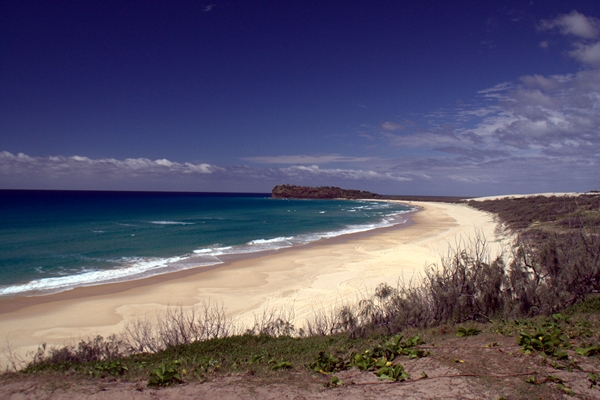 Cool Dingo is a Fraser Island tour company that is targeted to the younger traveler, specifically those from ages 18 to 35. They provide 2 and 3 day fully-guided and fully-provided-for bus tours that are led by an island guru. What does that mean? It means that all transportation, food and accommodation is provided for as long as you are in their company. If that’s not enough to say, “Where do I sign up?” then keep on reading for the summary of my 2 day tour. 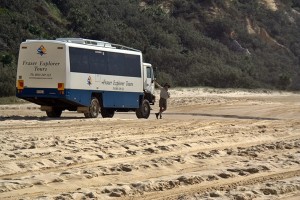 Heather and I were picked up from the hostel in Hervey Bay at 7:45 am (there are also pickups from Brisbane) and chartered to the mainland reception area to check-in. After that, we were dropped at the ferry to enjoy the 45 minute ride to the island. Upon arrival, we met our amazing tour guide, Dave, who on his own would be reason enough to visit Fraser.

We were acquainted with our 4WD bus that had a rather large supply of fresh fruit and muesli bars to snack on at any time we wished. Dave made his introductions, letting us know he has been in the business of giving tours here for over 20 years. 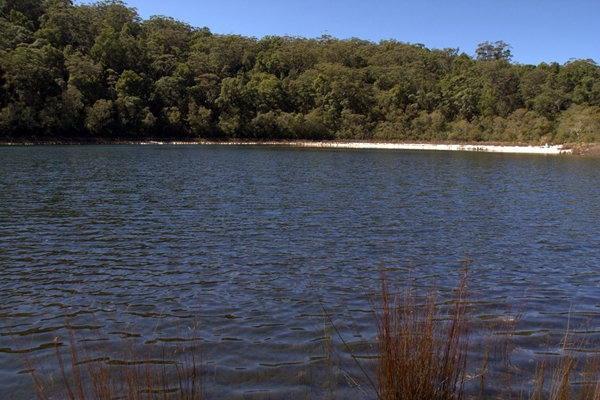 We made a short hike to Basin Lake, the first stop on our day’s itinerary and just one of the island’s gorgeous hangouts. 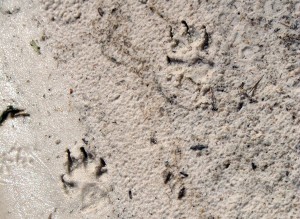 Basin Lake is not very big; it only takes about 10 minutes or so to walk around it. During the walk, I saw fresh dingo tracks on the beach, as well as some carnivorous red plants. These plants basically sit low to the ground and are covered in a sticky substance that actually makes them look like they’ve been rained on.

If you look hard enough, you may even see some fun little turtles in Basin Lake. I think I was more concerned/excited about the idea of seeing a dingo to give the turtles a second thought. Sorry guys! 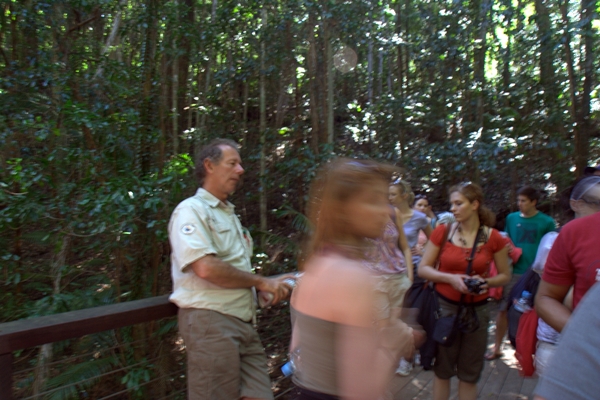 The middle of the day involved some light hiking through the rainforest areas of Fraser Island. Our tour guide would meet us at various points along the way, while we were left on our own to follow the paths to the next. 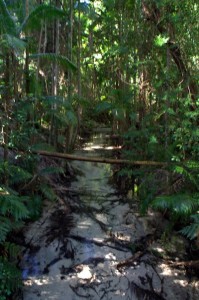 The idea that this dense forest could grow on an island of sand is amazing, but I guess we weren’t the first people to think that. Years ago, people would experiment with planting different trees and plant-life to see what could actually grow on the island, the remnants of which are seen today in clusters of random tree species.

One plant that was not part of these experiments is the king fern, that of which is very rare and grows around Wanggoolba Creek. It is considered so special that they actually built wooden walkways to keep people from trampling them. I must say that these ferns chose quite a lovely place as their home; just take a look at the crystal clear waters of the creek in the photo to the right!

The hiking that we did during this time was actually quite easy and peaceful (and shaded from the hot sun). Just keep in mind that it is best to not get off the paths here or do anything stupid, like stick your hand in random holes in the ground, as the island does have its fair share of snakes and spiders on location. 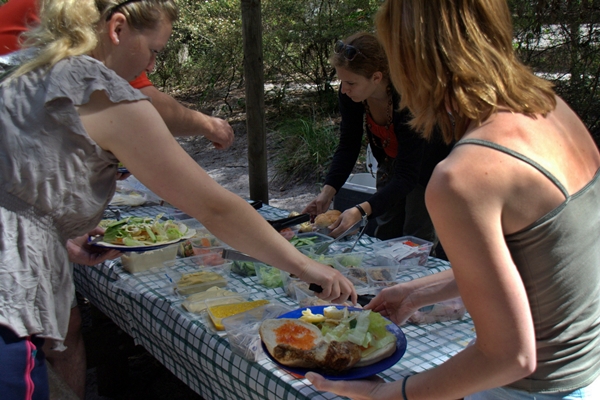 Food on a Cool Dingo tour is always served in buffet form, meaning you can eat as much as you want (hear that hungry backpackers?). Our first lunch was served at the picnic area near Lake McKenzie and featured salads, lunch meats, chicken legs, cookies, coffee, juice and tea. 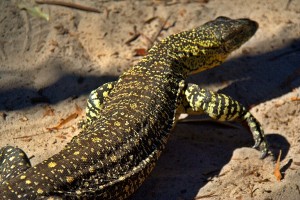 A rather large goanna decided to join the party as he sought the warm sunshine near our picnic. Even though he wasn’t there to start anything, his presence alone was startling to most of us since he was just so large and lurking about under the tables. The goanna is just one of the many interesting creatures on Fraser Island, as your guide will explain.

Lunch lasts as long as everyone wants it to, and it is a great time to chat with the other members of the group if you haven’t yet met them all. After we were stuffed and settled, we got ourselves ready for the big stop of the day: Lake McKenzie. 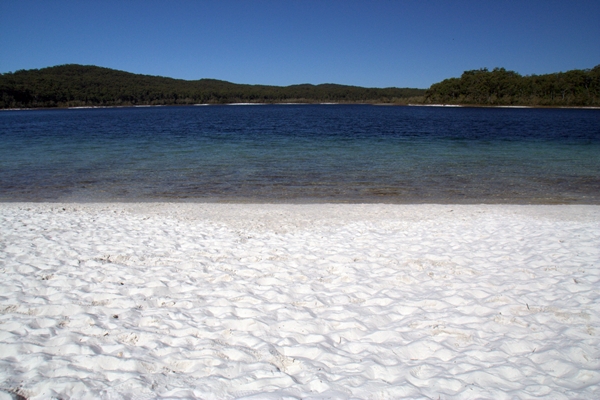 We made it at a perfect time to Lake McKenzie and practically had the entire beach to ourselves for the afternoon until the other tour groups arrived. NOTE: Because of current construction to the area around Lake McKenzie, access to the lake is only available to those that are participants of the major organized tours. 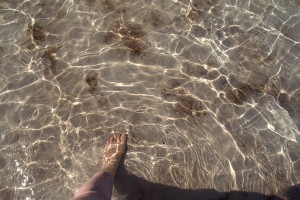 I was happy to see that the stories of crystal clear waters and white sands were all true. This happens because the meters of sand acts as a filtering system letting only the clean water to the surface. It’s one of the reasons that Lake McKenzie is the favorite place of many that visit Australia.

We had just the right amount of time to lounge on the beach, go for a stroll and splash in the water before the shade started passing above us. Since we were there in winter, a lack of sun meant the temperature got a bit chilly. However, the daytime activities were at just the right level, and I’m almost happy that we didn’t make it in the middle of summer. 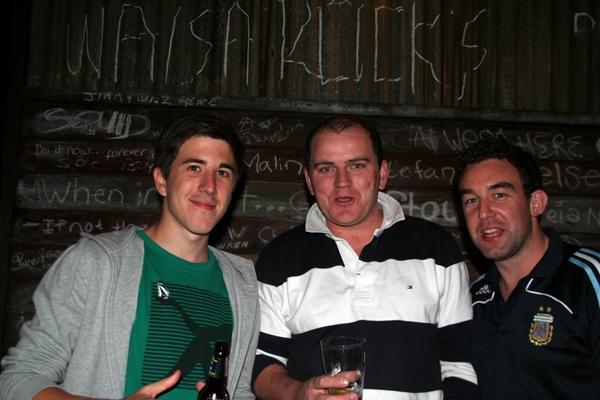 A gigantic buffet dinner is served at the Dingo Bar in the evening, which is where many of the different tour groups meet up. There’s a hot food bar and a cold food (salad and fruit) bar, so there should be something to suit any appetite. Did I mention it’s all pretty good? 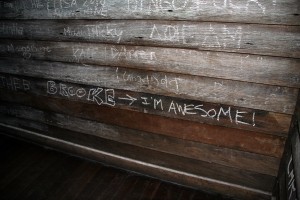 After dinner, most people like to hang out and get some drinks, play pool and foosball, or get jiggy on the dance floor. That’s right! The Dingo Bar turns into a night club in the evening so you can have some fun with those on your tour, as well as others. The club is pretty sweet, and you can feel free to leave your mark on the walls.

The club closed down around midnight, but since we had another early day coming up, no one was really complaining. After such a long day, bed was definitely calling my name! 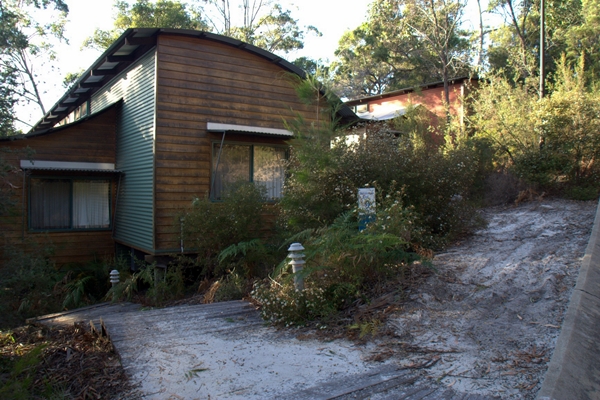 I was rather impressed by the quality of accommodation provided to us at the Wilderness Lodge. It was pretty much like a nice hostel with around 4 rooms in each lodge, a large kitchen area and comfy beds. 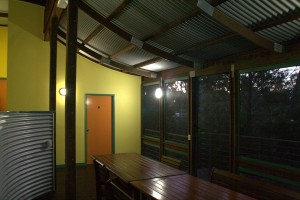 The options for the tour is to either stay in a double room or a quad room. The double rooms have one double bed, and one single bed, while the quad rooms have two sets of bunk beds. The double rooms, of course, will cost a few dollars more. The rooms even have a heater as it will get quite cold at night in the winter months on Fraser.

Another perk is the access to the reception area of the Kingfisher Resort. Here there is a pool, sauna, internet access and more to keep you busy if the rest of the itinerary just isn’t enough for you.

And so concludes day 1 of my Fraser Island adventure as a guest of Cool Dingo Tours. Stay tuned for a recap of day 2 (packed with photos of course), or just subscribe to my feed and get instant updates in your reader or email!