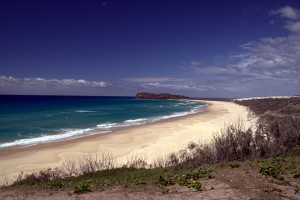 Fraser Island is one of the most popular islands in Australia, and just a popular tourist destination overall. Boasting crystal clear waters on white sand beaches, unique wildlife and a spectacular climate, it’s no wonder tourists flock in to see this World Heritage site. One of the unique features, besides packs of wild dingos roaming free, is the lack of infrastructure, meaning only 4WD vehicles can drive on this giant sand dune, which is said to be the largest sand island in the world.

Location: Fraser Island is located off the east coast of Australia at the southern end of Queensland opposite Hervey Bay.

Getting to Fraser Island

Many tourists will use Hervey Bay as a hub for getting to Fraser Island. However, tours will depart from other surrounding areas like Noosa and even Brisbane. Since only 4WD vehicles are able to navigate the island, people with their own transportation will need to leave their non-4WD vehicles on the mainland. If driving a 4WD, ferries (Hervey Bay or Inskip Point) can transport them to the island.

Search for a flight to a nearby location, such as Brisbane, using the search widget below:

Fraser Island in summer can get quite warm and humid, but the sea breezes blowing across the island make it much more pleasant than areas to the north. Normal highs will be around 30 Celsius with cool nights. Winter brings highs around 15 Celsius with plenty of sunshine.

Things to Do on Fraser Island 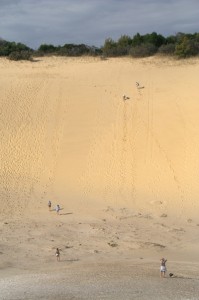 There are plenty of different ways to tour Fraser Island. You can self-drive a 4WD on the beach, sign up for a all-inclusive tour, use your time to hike the many internal paths or just sit yourself at the beach for hours on end. Lake McKenzie is the big tourist location on the island with water so clean you could bottle it. The Champagne Pools provide a fun little area of sun-warmed water to relax in, or you can climb to the top of Indian Head for a massive and magnificent view of the area from above. Fraser is a perfect spot for whale watching in the late spring to fall months.

As stated above, the aboriginal name for Fraser is K’gari, but it later became known as the Great Sandy Island (suiting, no?). However, at one point a ship that was being sailed by Captain James Fraser was damaged by the coral of the Great Barrier Reef, forcing the passengers to get on lifeboats and try to make their way to what is now Brisbane. However, they were forced to land on the Great Sandy Island, where it was said that most people either died of disease and hunger or were murdered (and possibly made victims of cannibalism) by the local tribe. The Captain’s wife was the only one to survive the ordeal and was forced to live with the natives until rescued. The island became known as Fraser’s Island, and later just Fraser Island.