10 Great Places to See in Australia’s Outback (Besides Uluru) 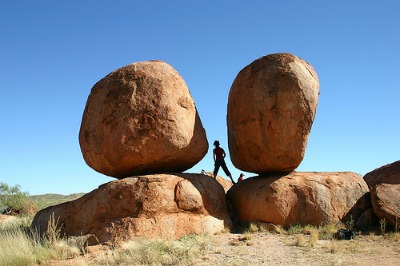 Think of the Australian Outback, and it’s likely to be one image that comes to mind first – Uluru. There’s good reason for this, of course, as the great red rock is an iconic image of not just the Outback but of Australia itself. As you might expect, however, there’s much more to the Outback than just Uluru.

Here are some of the not-to-be-missed destinations and attractions in central and western Australia – besides Uluru.

Mount Augustus – There’s another great red rock in Australia’s Outback, and it’s actually bigger than Uluru. Mount Augustus is in Western Australia, and there are two trails up the mountain as well as hikes around it.

Devil’s Marbles – As you might guess from the name, this is a particular rock formation of boulders that sit on the surface of the earth. Like Uluru, these rock formations in central Australia are culturally important to the Aboriginal people.

Coober Pedy – You may have heard of the underground hotels that are famous in this part of Australia; it’s not a tourism gimmick. The area around this town is so hot and dry that most of the residents live underground in cave-like homes, too.

Bungle Bungle National Park – You might not think of the age of mountains, but some mountain ranges are older than others. The Bungle Bungle range in northwest Australia dates back more than 350 million years, and there’s plenty of room for camping and hiking.

Antony Gormley Sculptures – Outside the Western Australia town of Menzies lies the salt plain of Lake Ballard, 10 square kilometers of which serve as a gallery for more than 50 metal statues by artist Antony Gormley. Residents of the area were the inspiration for the sculptures, and since the statues are spread out from one another it can take a few hours to see them all.

Ancient Empire Walk – Australia’s southwest is home to a thick forest of enormous trees, complete with a canopy boardwalk suspended 40 meters above the ground. This Valley of the Giants is part of the Walpole-Nornalup National Park.

Camel Rides in Broome – Yes, you can visit the gorgeous Cable Beach in Broome without riding a camel, but why would you? It’s worth it, if only to confuse friends later by telling them you rode a camel across the sands of… Australia.

Bradshaw Paintings – Rural Australia may be mostly uninhabited now, but it wasn’t always so. A visit to the Kimberley region gives you a chance to check out rock art that some experts believe dates back 60,000 years.

Riversleigh Fossils – Australia’s best-known fossils are in northwest Queensland, where visitors can check out animal fossils that are as much as 30 million years old. The area was designated as a UNESCO World Heritage site in 1994.

Broken Hill – This mining town may not feel as rural as it is once you’re there, since it’s quite a popular stop for visitors to the Outback, but since it’s still a working town it’s more than just a tourist attraction.

Visiting Australia’s Outback gives you a chance to get to know a completely different side of Australia than the one showcased so beautifully by the big, cosmopolitan cities on the east coast.