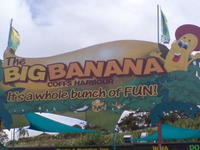 Fair Dinkum! Believe it. Microsoft Australia has decided it is high time to add Australian slang to it’s dictionary. Nothing is more pitiful than an Aussie trying to write about chucking a Sickie, his Ute, or Trackies and not knowing how to spell it now is there!

Microsoft has created a panel to collect the new vocabulary. They are to look at the key Australian words that aren’t slang so much as common words. Additionally, the words are not allowed to be offensive.

Apparently NSW needs to rally! Tooheys beer is not yet in but both VB and Foster’s are! Aussies are taking part in an online poll that has drawn more than 24,000 voters so far.

The winning words will no longer appear with a red squiggly line under them, indicating a spelling error, when typed using the world’s most widely used software.

“Although many Australian words and spellings are already included in Microsoft Office, we saw the upcoming release as the ideal opportunity to make sure the Aussie classics weren’t forgotten,” said Microsoft Australia spokesman Tony Wilkinson.

“We knew that some quintessential Aussie vernacular was missing.”

People can vote on the popularity of the words at www.microsoft.com.au.

Good on em! She’ll be right!