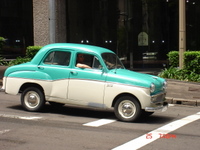 While Australia is a tourist mecca, there are still plenty of social issues that plague their surfer laden shores. One such issue, over cars, has reached the land down under. Lately there has been all kinds of debate over the future of climate change, alternative fuel cars, and the future of Australian manufacturing. Holden is basically the Aussie branch of General Motors. Like their American cousins, according to press releases, more job cuts are getting ready to affect Australia…

Some sentiment on the cuts:
“Why on earth aren’t we asking them to manufacture a small-to-medium car that might be popular in the domestic market?”
“Why aren’t we seeing the intellectual property invested in hybrid engines or new fuel technologies, so that we can make sure we’ve got part of the action for the future?”
AMWU national secretary Doug Cameron says more than 200 jobs have been lost from the industry every week since the Howard Government came to power.
To see the rest of the Article click here.
A related thought provoking movie: Who killed the Electric Car