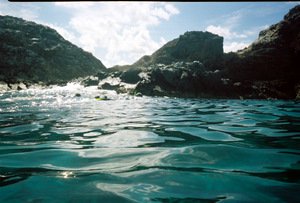 Julian Rocks is the small rock formation found off the Australian coast in Byron Bay. The tiny islet is considered a bird sanctuary, so climbing on the rocks is strictly prohibited. You can, however, take one of the several guided snorkeling trips to Julian Rocks from the various providers around town. Julian Rocks is no Great Barrier Reef, but if you’re not going to make it far enough north to visit Cairnes, it will certainly do.

I made the trip to Julian Rocks with Sundivers, one of the many dive operators who tolerate snorkelers. They were a pretty average dive operator, but the place was chaos before we left. We were provided with wetsuits (the kind that suck because they keep you afloat and prevent you from diving down to have a closer look), which made me feel like I was stuck inside a giant fishing bobber. But someone forgot to board our snorkels or masks. We didn’t hunt them down, as the operators knew we were snorkeling and we assumed they’d be provided on the boat. Naturally, the dive operator blamed us for the oversite. Luckily we ran in to a competing dive operator at the dive site and were able to borrow our gear from them.

The greatest piece of advice you’ll get swimming around Australia? Don’t touch anything. They’ve got some freaky stuff down there, like the blue bottles, several of which we saw floating through the water.

Julian Rocks is more of a scuba destination, though the snorkeling was pretty nice. Most of the sites are at a depth of approximately 15 to 20 feet. It doesn’t sound like much, but it is an impossible distance when sporting the buoyant wetsuits. 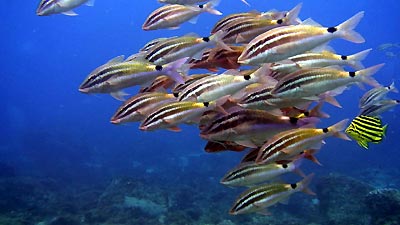 I did have the opportunity to see heaps of Blue Damsel fish, an AMAZING iridescent blue beauty. I also saw a sea turtle for the first time in the wild, an angel fish, masses coral, sea urchins and other organisms. I’m not sure what most of the things were, but they sure were pretty. No shark sightings, despite all of the “Come to Julian Rocks and Swim With the Sharks” press.

If you want to dive a little deeper in to the subject and get a preview of what creatures you’re likely to see in the area, Julian Rocks has its own website at julianrocks.net.