When visiting Melbourne, it’s a good idea to also plan some adventure along side checking out the free things to do in Melbourne and festivals.

Aussies are fairly serious when it comes to their enjoyment and this is pretty obvious since Australia is known for its plethora of theme parks. Plus, the theme and amusements parks close (or in) Melbourne are among the finest worldwide. 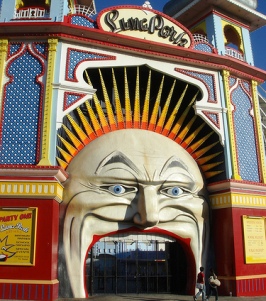 If you are really serious about having fun, then Luna park of Melbourne is the place you should go. There are a lot of reasons why Melbourne’s Luna Park is one of the favorite places to enjoy a fun ride, no matter how old you are.

Soak up the fantastic carnival ambiance while enjoying the seventeen rides and highlights which include the Carousel, Ghost Train, Scenic Railway plus the high speed adventure rides such as the Pharaoh’s Curse, the Enterprise, the Metropolis and the G-Force.

The St. Kilda Adventure Playground is probably one of the best playgrounds in Melbourne. Famous among the kids aged 6 and above, this theme park provides them sufficient opportunities to jump and play around. And the playgrounds are very secure, so you don’t need to worry about anything. In addition, the adventure equipment is modern enough in order to take the boredom factor out of the area. 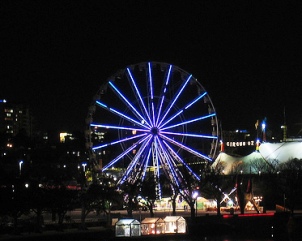 Melbourne is proud to be home to the Giant Sky Wheel, the largest traveling Ferries wheel in the southern hemisphere. It comprises thirty six Gondola carriages , each capable of housing 6 people. The ride takes about 12 minutes.

Located along the Yarra River’s edge, a ride on this giant wheel includes fantastic Melbourne Skyline views. The panoramic sights of Melbourne are spectacular and the illuminated night skyline is a best part of any tour to Melbourne.

Situated in the hub of Docklands, Melbourne, Flymotion Action Zone is composed of the newest action adventure amusements. The majority of these soaring family activities are possible thanks to the latest advancements in inflatable technology called Krush KushioNZ. These are stunt bags that are inflatable so when you fall on them, there’s nothing bad happening to your body.

The park is only open during weekends and public holidays from 10:30 a.m. to 6 p.m. During the school holidays the park is open daily.

This is probably one of those theme parks in the Melbourne are where your adrenaline will really rush as you come smashing down an 800-meter stainless steel track at a rapid pace. Furthermore, the Toboggans themselves complement with brake and speed controls of their own in order that the daring could truly toss warning to the zephyr. Apart from the water rides, you can also choose to play mini golf and try your skills at go karts.

The Funfields or the Whittlesea Alpine Toboggan Park is located at Plenty Rd., Whittlesea, about 40 km from Melbourne. The park is closed for the winter. The park is open during weekends, public holidays and school holidays between Sept and April, from 10 a.m. to 4:30 p.m.