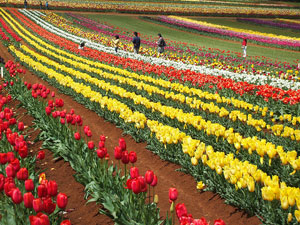 Mid-spring is one of the best seasons to visit Melbourne. This is the time when you can see the beautiful flowers in bloom and the weather is just perfect for sightseeing. October is one of the months when the city draws attention from culture seekers, sports fanatics as well as nature lovers. During spring the city is proud of its different festivals and events, the enthusiasm of its locals for wine and foods and the great art scenes. There are wonderful October events and festivals in Melbourne that provides a continuous source of fun to both locals and tourist coming from everywhere.

Melbourne Fringe Festival – This is the biggest yearly festival of independent arts in the country and includes a variety of arts such as cabaret, circus, comedy, dance, music, movement, spoken word, visual arts and a series of unique events. During the festival, guests can pick and choose from an array of various events which happen in several locations around Melbourne. Established in the year 1982, the event is indicative of a tough independent arts history that booms in the metropolis and keeps on growing in standing and size every year. The fringe festival takes place between Oct 1 and 11.

Tesselaar Tulip Festival – This event is a great opportunity to take a break from your daily busy schedule to stop and smell the fragrance of the flowers. It is believed that variety is flavor of life so, why not expand your perspective and do something different. You have the chance to witness over a million of spring flowering buds, tulips varieties, individuals in Dutch attires, wooden clogs, fantastic food and entertainment. The delight of this festival will takes place from mid-September to mid-October. And is open to the public from 10am until 5pm daily.

Melbourne International Arts Festival – This yearly event of international arts in the city of Melbourne is largely considered to be one of the foremost arts festivals in the entire world. The event is packed out with activities and great things to do such as dance, literature, music, theater and visual arts. The city is filled with theaters and galleries that will be placedd on an exclusive performance for this event. The world of entertainment, media and arts in the city will really liven up for the festival. For first timers to this festival, there is a package for them which includes tickets to major shows that everybody talks about. The festival lasts between Oct 9 and 25.

Melbourne loves glorious spring. With is changeable weather, the city is cool during spring time. There is a big contrast between the colder and warmer days compared to the past month.

A lot of major international airlines provide daily flights to Melbourne. But due to the remote location of the country, they are inclined to be not as aggressively priced compared to other places in the world. October is an ideal time to book a flight to this city. You have to remember though that the city is active year-round with events and festivals, so it would be wise to look for a great deal during this season.

Hotels in Melbourne provide everything, from five star luxury hotels, to hostels and cheap budget lodgings. You can always get discounted rates for many accommodations in the city either by looking up deals online or by talking to a travel agent. Since October is also busy with festivals, it would be hard to find accommodation during those times. Thus, it is advisable to book in advance.