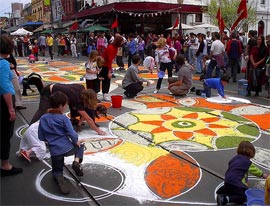 Following in the footsteps of other fringe festivals, most notably the enormous Edinburgh Fringe in Scotland, the Melbourne Fringe Festival has grown incredibly from its modest roots in 1983 as an alternative to the Moomba Festival, into one of the biggest and most anticipated events on the entire Melbourne culture calendar. The Melbourne Fringe now runs for 3 weeks from late September through mid October, coinciding with the emergence of spring.

The 2008 Melbourne Fringe Festival runs from September 24 through October 12, and is again sponsored by The Age newspaper, which is one of the largest Melbourne daily newspapers.

What is the Melbourne Fringe Festival

Similar to other fringe festivals around the world, the Melbourne Fringe was created as an alternative to the more mainstream culture events like traditional theater and classical music concerts. Nearly all the participants are locals, rather than bands of roaming artists who go from festival to festival, so the offerings here are unique. You’ll get a mix of experimental theater, comedy, performance art, music, film, and cabaret, and nearly all of it living outside the traditional boundaries.

There is an organizing committee and of course an official website, but one thing that makes the Melbourne Fringe Festival unique is that there is no “official” list of participants and venues. In reality, there are lists of events and artists, and each has to register well in advance to be considered for this privilege, and the artists actually have to pay AU$270 to be sanctioned as well, but theoretically this is an “open source” event so venues and artists who didn’t register can claim to be part of the festival anyway.

Where are the events? 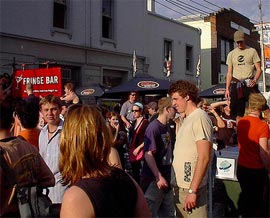 With around 3,000 participating artists and around 300,000 total onlookers, it’s no surprise that this event is spread out through the city. There is a high concentration of venues and events in the artsy Fitzroy neighborhood, as well as in Melbourne CBD and Brunswick to the north. There are literally events throughout the city so once the schedule is out you’ll be able to find something in most any corner.

Approximately 25% of the events are free, but the rest require tickets, which go on sale in early September. Most events charge between AU$10 and $AU25, and the average price is a bit under AU$20, or around AU$15 if you qualify for a concession. You can buy tickets online at the official Melbourne Fringe Festival website, or in person at the HUB, which is located around the North Melbourne Town Hall, on the corner of Queensberry and Errol Streets.

The busiest venue of the festival is the Festival Club itself, which has many of the more prominent music acts and DJs on a nightly basis. Lately it’s been in the Main Hall of the North Melbourne Town Hall.