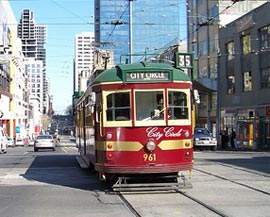 Many cities around the world have special bus or tram routes meant for tourists, which often circle through a collection of the most important sights in the central city. Melbourne has its own version with the City Circle Tram, and the even better news is that it’s absolutely free.

Where the City Circle Tram goes

Exactly as the name implies, this tram literally does a circle (actually more of a rectangle, but you know what I mean) around the Central Business District. It avoids the center of the city, but the stops are frequent so if you have a good map you’ll be able to get within a few blocks of anything you want to reach, and the blocks in the CBD are quite short.

Using the tram for a city tour

This tram won’t replace a proper bus tour of the entire region because the CBD represents only a small portion of the many interesting things to see here, but it’s an excellent and useful place to begin. They have entertaining recorded narration that plays between stops, explaining exactly what you are passing and what you can find if you alight at the next stop. I’d very much recommend jumping on the City Circle shortly after you arrive in Melbourne and taking a full lap around, perhaps jumping off a few times if things interest you. The whole loop takes less than an hour and it can be a great general introduction to the city so you’ll know what is where for later exploration. 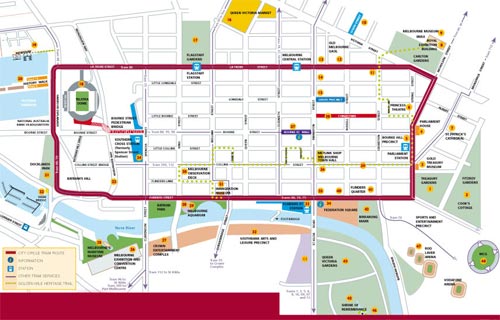 Get a larger version of this map and more information at this link.

Using the free tram for transportation

Another convenient thing about this route is that just outside its perimeter you’ll find some interesting things that might not be walking distance from your hotel or hostel, but once you take the loop to the closest point you’ll be within easy reach. The Crown Casino and Entertainment Complex is just over the river from one stop, St. Patrick’s Cathedral is just east of one stop, and the bohemian neighborhood of Fitzroy begins just beyond that. For cheapskates who aren’t in a terrible hurry, this tram can be the backbone of your area transportation, which puts many more things within easy and free reach.

Interestingly, the City Circle Tram doesn’t begin trundling along its loop route until 10am each day, which helps keep it out of the way of morning rush hour commuters, and still works fine for most tourists. The tram is scheduled to come every 12 minutes in both directions (clockwise and counter-clockwise) so there really isn’t much point in studying the timetable, as it runs a bit behind schedule at times anyway.

It’s true that Melbourne isn’t loaded with world-famous attractions like Sydney is, but some of the highlights near the route include:

There’s a list of 48 total attractions near this thing on the official Metlink site.