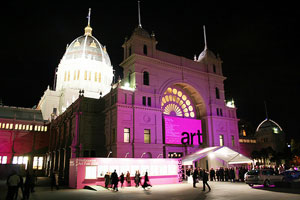 Many say that Melbourne is a city created for the winter. And since August is still a winter month in Melbourne, it gets dim early this time of the year. However, when the sun is out, Melbourne lights up. This is probably the reason why in spite of the cold climate a lot of people still go to this wonderful place. Get your scarf and comfy coat and witness some of the fantastic events of Melbourne in August.

Melbourne International Film Festival – The MIFF is a popular event in the city with dedicated audience. The festival hosts a banquet of film delicacies coming from more than 50 countries for seven days every winter. MIFF is considered the biggest showcase of new cinema in Australia. The festival actually enjoys 185,000 admissions each year, making it one significant public event in Melbourne. MIFF will start in July and will end on August 9, 2009.

Melbourne’s Writers Festival – Ten-day banter, chat and aggravation with the top writers of the world, the Melbourne’s Writers Festival is the time where concepts brighten up and words come to life. There are over 250 events that you witness on this 10-day celebration. You can also look into the festival marquee, wherein you can purchase books and have your favorite writer sign them, stay for debates, music, games and fun. The festival will take place at the Fed Square on August 21 to 30, 2009.

Melbourne Art Fair – Featuring over 80 chosen galleries from different countries like USA, United Kingdom, the Netherlands, Germany, Italy, China, South Korea, New Zealand, Japan and of course Australia, Melbourne Art Fair is the foremost public exposition and trade fair of modern visual art in the area. Other things to see are the international and national collector programs, art publications, free public discussions, guided tours and a lot more. The art fair will take place at the Royal Exhibition Bldg. from August 4 to 8, 2009.

Australian Rules Football – If you are searching for a more thrilling experience go to Etihad Stadium or Melbourne Cricket Stadium to witness the Australian Football League game. Have fun and be thrilled with excitement on one of the favorite sports in Melbourne, where a regular match can draw a more or less faculty of vocal yet nonviolent supporters. This exciting football games is incomparable. Played during the winter months from March until September, games take place each Friday nights and afternoons of Saturday and Sunday.

>>read more about Free things to do in Melbourne

Among other places in Australia, Melbourne is probably the one with the coldest climate during winter, with some of its nights generating ice. Snow does not descend in the city, but rather on its remote hills.

So, don’t forget to put your coats on keep yourself warm while wandering the city.

Since it is winter in Melbourne you are likely to find cheap flights to Melbourne during this month. There are a lot of airlines that will offer discount promos during the winter months so it will be wise on check on them if you are looking forward to obtaining a cheap flight to this Australian city.

It is not surprising to find a lot of hotels not fully booked during this month as the number of travelers is not really that plenty. Thus, many discount and promo accommodations are being offered by many hotels and hostels in August, so you need not to worry if you don’t have many funds for your accommodation as you can always grab the discounted one.