The Legend of Broken Head Beach 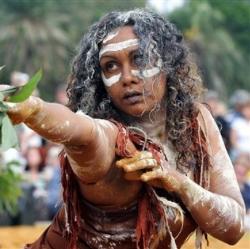 .Brokenhead Headland is found just south of the surfer enclave of Byron Bay, Australia. The area, like much of Australia, has an ancient and significant role in the aboriginal history of the country. Much like every other coastal area in eastern Australia, Broken Head has its own aboriginal slaughter story. It’s certainly horrific, but not at all uncommon in Australian history. The aboriginal peoples were regularly slaughtered to make way for the immigrants, much like the indigenous peoples of North and South America.

During the settlement of eastern Australia, a large quantity of flour was stolen from the local trading post. Naturally, the aboriginals were blamed for the theft. As a result, the colonial people slaughtered the natives by gunfire as punishment for the crime. Believe it or not, this incident is actually more humane than some other areas. The settlers went so far as to poison the aboriginals by lacing their gifts of food with strychnine.

The legend dates back to aboriginal times and has two very distinct and interesting endings.

A woman, Gorgogan was born and lived in Woodenbong to the north of Broken Head Beach. She magically flew south to the beach and became a spirit. During the day, she would appear as the black rocks on the shore along with many other women spirits. At night she would…

Ending One: Appear as a light at sea and lure certain men to their deaths.

Ending Two: Appear as a light at sea. 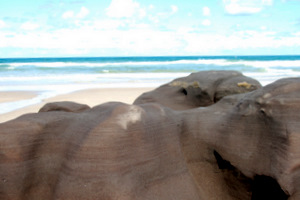 The differences between the two endings fascinate me. Were certain men supposed to be lured, and if so for what reason? If the men were drown, who was responsible for their deaths, the men or the spirit? In other words, was the longing the problem or the availability? The questions can go on indefinitely. I love it.

According to a local aboriginal authority, the second version is most likely the original. Aboriginal folktales generally have ambiguous and peaceful endings, allowing the listener to draw his or her own conclusion.