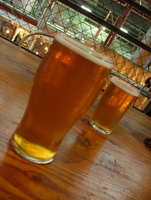 I realize that a large number of my posts center around the amazing social life of Sydney, so in an act of good will and opportunity to acknowledge that there are other cities with a nightlife out there, I am reaching out to our brothers on the west coast.
From a friend of mine, here is some insider information on what’s cool in Perth… Now I do trust his Judgement 100%, because not only is he a fair dinkum Aussie, but I know he takes his Social Responsibility (and his beer) very seriously.
From the book of Nathan: In the beginning God created the hops, the barley and the yeast. And the stein was without form, and void; and thirst was on the face of the travellers… (from Heather- oh dear here we go…)
Okay, it’s debatable that one shouldn’t parody religious texts, but let’s at least debate it over a beer. Where better to enjoy a cold bevvy (Aussie slang for beer) than Fremantle in Western Australia. ‘Freo’ as it is known to the locals, is located only 20 minutes south of the Perth CBD. It offers some of W.A.’s finest restaurants and cafes, and some of the states best preserved late 1800’s streetscapes… but enough about that, let’s get back to the beer.
My personal pick of the Freo ‘watering holes’ is the popular Little Creatures Brewery in the Fishing Boat Harbour precinct.

Set in a huge rustic warehouse, visitors have a selection of 4 beers brewed on site, various W.A. wines and an absolutely delicious menu. My suggested tasting order of the beers would be to start with the

For those on driving duty and who still enjoy the occasional foam-top, the Rogers is slightly lower in alcohol but still full of flavour.
If after lunch you’re still keen to stretch your legs around Freo (beer drinker talk for ready to start a pub crawl), I highly recommend the following beer / pub combinations. 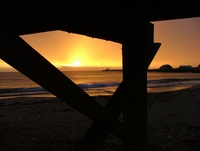 And on the seventh beer he rested….and it was good.