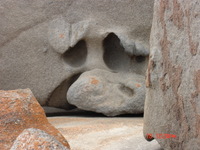 A couple of months ago I flew to Adelaide for the U2 concert. Since I was headed to the area, I was on a mission to try and experience some of the local produce both in eaten and imbibed forms.
I have to relay a funny but relevant story first. This past week a van full of girls went on a trip. As we drove past a vineyard, one of the girls eyed the vines laden with fruit, rubbed her tummy, smacked her lips and stated- a few of you are going to have to die tonight…
While I’m guessing the grapes in the wines we tried on the trip to d’Arenbergs had given up their lives and been sent to the smasher a few years before, their sacrifice was not in vain.
d’Arenbergs prides themselves on doing things just a little bit differently. Whatever it is they are doing I heartily approve. Desperate for food, we showed up to the winery a bit road weary and not in our Sunday finest (on a Sunday at that). Fully expecting to be turned away as we had been from another local restaurant, we pulled up to d’Arenbergs. A beautiful country space and a gourmet restaurant, we were graciously and warmly welcomed. Huge acolades for the very kind and thoughtful staff !
A bustling Sunday afternoon in the popular McLaren Vale, we were not surprised that they were completely booked out. With a genuine smile, the Maitre’d said she’d see what she could do and directed us to go enjoy ourselves in the tasting room while she could figure something out.

Thankfully, we adjourned to the restrooms to freshen up, and then did quite happily move ourselves into the tasting room. Greeted just as warmly and attentively there, we were absolutely overwhelmed by the hospitality. Many times at wineries or gourmet-type environs, a younger couple, not so well dressed would be completely ignored. Instead, we had our own personalized attendant who suggested wines for us to taste, gave us the history, back ground, and interesting facts about each of our selections. We had been hesitant about tasting the Premium wines since they were of our potential purchase range, however, our new friend and helper absolutely insisted we try at least one anyway. By this time the Maitre’d had come around and informed us that a table was ready.
Quite pleased with how the afternoon was shaping up, things went from good to better! When I mentioned to the server that I was gluten intolerant, she immediately approached the chef. When she came back she stated it was easier to tell me what I could NOT have versus what I could have. Nearly the entire menu was gluten free. This is the sign of a VERY good restaurant for everyone eating there food intolerant or not. What it generally means is the quality of the food is very high. Dishes are prepared in the traditional manner in which they were meant to be cooked, without cheap fillers or thickeners.
The meal was sensational. We shared an entree, 2 mains, and then were tempted and succumbed to splitting the most stunning wobbly (soft centered) chocolate pudding known to man. While the prices were not on the inexpensive side, I have been to pubs that charge far more for a counter meal. And you certainly can’t get Spanish Paprika Rolled Lamb Loin with Pomegranate Salsa at any pub I’ve ever been to. The value for money was out of this world.
Sated and stuffed we were quite sad to leave our new found little corner of paradise. I only hope a few of you get a similar experience if you pop into the McLaren Vale. Even if you are on a budget, you should definitely make the splurge to stop at d’arrys.
You can find their distinctive wines by the red stripe on the bottle. One of their pretty respectable Shiraz wines can be found at most bottle shops for around $20. 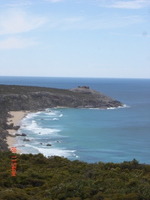 d’Arenberg is situated in the hills four kilometres north of the township of McLaren Vale on the Fleurieu Peninsula, on an undulating triangle bordered by the Gulf St Vincent, eight kilometres to the west, and by the southern Mount Lofty Ranges, fifteen kilometres to the east, and is just 40 kilometres south of Adelaide, the capital of South Australia
Click here to see the Laughing Magpie reviewed on YOUTUBE
Other South Australia Articles