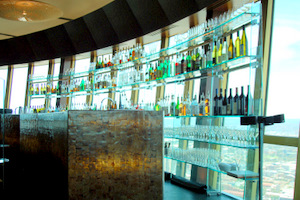 The 360 Bar in Sydney is the perfect location to take in the sweeping views of the city, while sipping a frosty cocktail. If you’ve been wandering the city sites for hours, it makes for a nice break. The 360 Bar is located in the Sydney Tower, one floor down from the Sydney Skywalk. The bar, as indicated by the name, rotates at the top of the space needle. You can relax in your booth, while enjoying the panoramic views of the city.

Tourist regularly pay the $25, which I think is as big of a rip off as paying about $30 and waiting for four hours to go to the top of the Empire State Building, to climb atop the Sydney Skywalk. I, for one, don’t like to pay just to go to the top of tall buildings. Admission to the bar is, however, free. The choice to me is clear. Avoid paying the entrance fee for the Skywalk, and instead divert your fundage in to something more useful – the purchase of a signature drink in the 360 bar like “Amanda Hunginkiss.” It’s simple economics; you get the same views in both locations, but the bar offers views. You’re not likely to find an Australian who would argue with that logic, and the drinks really are tasty. Think about it, you can have two drinks (and maybe catch a little buzz) or you can pay to walk around.

Dining is also available in the adjacent restaurant, but a little pricey.

Should you really want to feel the wind in your hair, the Sydney Harbor Bridge Climb, though expensive, is well worth the coinage.