Would You Try Fish & Chips Gelato? 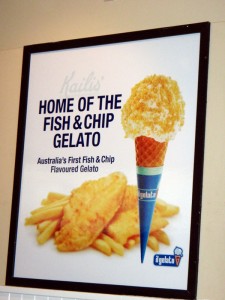 While on my stay in Perth, I met up with a couple of friends (Heather, Adam and Nicole) and they told me a story of a gelato mishap — one involving a flavor so preposterous I thought it was made up. However, hearing that it was truly disgusting added some credibility to the idea of anyone selling a fish and chips gelato!

My first question: “Did it taste like fish?!?!”
Heather: “No, not really. There was a slight lemon flavor.”

My second question: “Was it sweet?!”
Heather: “Not really.” (or something to that degree)

Later on, though, on my last night, I met up with the group again and was actually brought face-to-face with the infamous gelato shop in Fremantle selling this flavor.

I walked over to the freezer, and I knew I couldn’t pass this opportunity up without at least giving it a taste. I asked the gelato server for a tiny spoon.

In other words, it was just not good.

I told Heather my thoughts on the freezer burn and a light bulb went off when I found the hidden flavor she was searching for.

Oh, fish and chips gelato, you are a find, but I have a feeling in Fremantle you will stay.