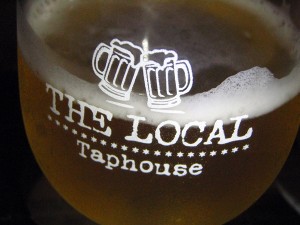 I haven’t decided yet if the Good Pub Food Guide 2011 for Sydney and its surrounds was the best or worst holiday present my boyfriend could have received. While it led us to eating and drinking the other night at The Local Taphouse in Darlinghurst, I can foresee us spending an awful lot of time trying to experience all the book talks about.

The Local Taphouse is awarded in the book as the hotel with the best beer list, spawning from the fact that it has 20 beers (those coming from Australian breweries) on tap at any given time. On top of that, the beers are rotated every fortnight, and that means that over 200 different beers can be experienced here in any given year. I’m always after a good unique brew, so we made it a night to enjoy both the beer and the food this past Saturday.

First impressions did not disappoint. You are met with a pub covered in dark wood and an eclectic mix of flair, such as lights inside bird cages, giant wood tables and old fashioned couches. There are 3 levels to explore, but don’t worry, each has the exact same bar setup with the 20 tap beers to choose from. If you’re just after drinks, then the main floor is the way to go, but dining can occur on both the middle level and the new rooftop area. 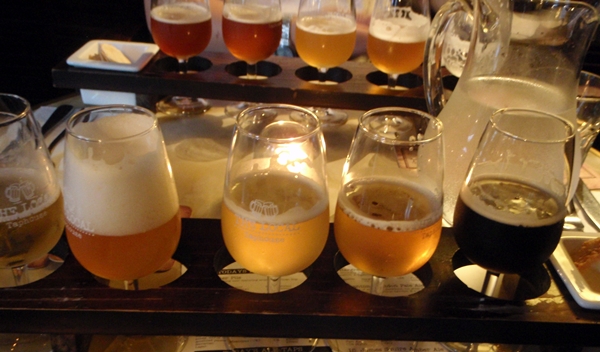 Go for a tasting panel of beers if you’re having trouble choosing. We were; twenty interesting beers on tap makes it hard to pick the first one. Instead, we each got 5 tasting glasses for $13 bucks a panel, sorted from lightest to heaviest. From there, we were able to pick which beer we wanted to sip with our meal – a delicious feast on its own. 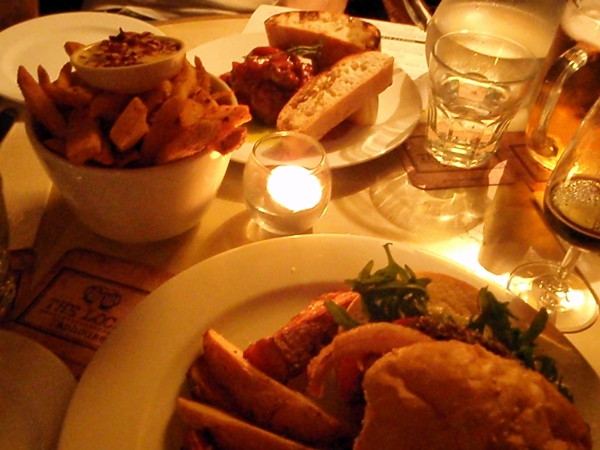 The pub food at the Local Taphouse is beyond fantastic. Between the two of us, we split a starter of meatballs, chili frites with parmesan-chilli mayo, and a meal of the most excellent 3 beer beef burger I’ve probably ever tasted. It was roll-yourself-down-the-street-after-eating good, but unfortunately, we were too full to enjoy the chocolate fondant dessert. 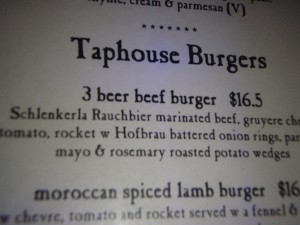 I guess that will just have to wait until next time because, yes, there will be a next time. We thoroughly enjoyed the Local Taphouse, everything from the décor to the service.

Our bill came to $77, which included two tasting panels, two beers, a 3 beer beef burger, meatball starter and a bowl of those awesome chili frites. What we learned: this was more than enough food for two people. Next time, we are planning on less dinner so we can enjoy that awesome sounding chocolate fondant, made with beer, of course.

To get there, we walked from Sydney’s Central train station about 15 minutes through Surry Hills to Darlinghurst. Check out The Local Taphouse.

If this sounds a bit out of your price range, why not have a look at my article on ways to save money on drinking in Sydney.