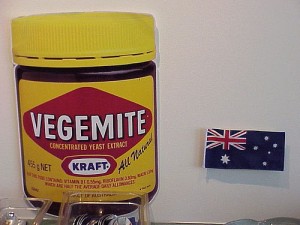 I awoke to an email in my inbox from my mom back in the USA with an excited tone saying something along the lines of, “See, even Oprah thought it wasn’t bad!”

Many Americans don’t care for the yeasty treat that is Vegemite, so I was a little concerned and taken aback when my mom was one of the few that thought it was almost… nice. Yes, she finished her piece of toast with a heavy layer of butter and Vegemite with a smile on her face. I was convinced her taste buds had been damaged in some sort of freak accident in my absence, but she assured me that nothing had changed; she just didn’t think it was terrible.

Now she has Oprah to back her up because as part of her Sydney tapings, she was given the delight of tasting Vegemite and liking it.

“Oh, whatever,” I thought. “She could be pretending.”

A little bite of Vegemite can surely go down with a smile if you try hard enough. The real kicker came when she decided to put MORE Vegemite on her cracker. That’s what convinced me that she might actually like the stuff. Go figure!

Still, I think it is funny that this whole ordeal was served up by Hugh Jackman with a cut eye and next to a bottle of a very nice Penfold’s Grange wine. Oh, and let’s not forget the hilarious fact that Hugh wouldn’t let Oprah smell the jar before tasting. Why would you want to eat something that doesn’t even smell nice?

Here is the video account of the tasting on Oprah’s website. I love how the Aussies cheer when she approves of the salty spread.