This post is part of an ongoing series on iconic Aussie food. Be sure to check back for more food adventures, or subscribe to my RSS feed to receive updates automatically to your reader. 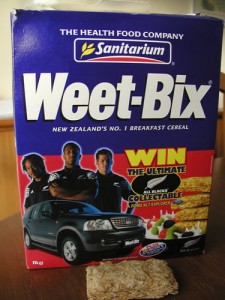 Are you a Weet-bix kid?

My introduction to Weet-bix came when studying abroad in Italy, and it was really only an introduction into the idea of Weet-bix. An Aussie guy in my hostel started going on about how he really just wanted a bowl of Weet-bix for brekkie, to the point where he burst out in the jingle. Of course, that moment stuck with me until I arrived in Australia and came to the realization that they are only simple cereal bricks. I guess it’s the little things we miss while travelling the world.

Weet-bix is a wheat cereal marketed in Australia and New Zealand, but instead of coming in flakes, it comes in bricks that flake off quite easily. You simply place a few bricks in a bowl, cover with milk and scoop up. I would like to compare them to Wheaties in the USA, but I don’t think the flakes are nearly as hearty (or delicious, in my opinion).

At first, I thought the brick form of this cereal seemed a bit strange. Why not just in flakes? But, after several boxes of Weet-bix were downed, I liked it. It’s great for serving size since you only have to choose how many bricks you want, and it’s nice because you don’t have to worry about spillage that can happen when normally pouring a cereal.

Weet-bix gets its name from the term wheat biscuits, which is then shortened to Weet-bix in true Aussie fashion. This cereal, and imitations, is very popular in Australia, and on my breakfast menu. It is also very popular on television ads involving athletes, such as soccer or rugby players, trying to entice the youth of Australia to have a proper brekkie in the morning.