This is a post in an ongoing series on iconic Aussie food. Be sure to check back for more, or subscribe to my RSS feed to receive updates automatically to your reader. 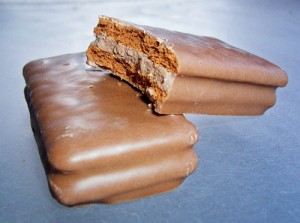 To explain what Tim Tams are I have to think hard because what I really want to call them is cookies. To be correct in Aussie terms, however, I have to refer to them as chocolate “biscuits” – two of them, sandwiched with chocolate cream and covered with a layer of chocolate. Chocolate Heaven, no?

To make matters worse (or better), they come in a variety of flavors. So instead of a chocolate cream, you might be met with caramel, cherry or some other divine mixture in the middle. The possibilities almost seem endless, and there is never a time where I was disappointed with my decision. Then again, it’s chocolate, and it’s really hard to get that one wrong in my mind.

I was actually warned about Tim Tams when I first arrived in Australia. Horror stories were told of travelers packing on a few pounds during their stay all thanks to these delicious “biscuits” produced by Arnott’s. So, be warned foreigners: tim tams are good… quite good in fact. Only get close to them if you have the power to force yourself to step away when things get out of control.

Ok, so I might be exaggerating the goodness of these “biscuits” a bit, but they are indeed tasty. They deserve a try when you’re in the land down under, and maybe even a Tim Tam Slam attempt.

The Tim Tam Slam occurs when someone bites both ends of a tim tam off, sucks the chocolate filling out, and then uses the biscuit as a straw to drink hot beverages, such as tea or coffee. Yes, it is a real thing. You can even watch this video on YouTube showing you the step by step process.