To go along with the iconic Aussie food series, I’ve decided to break it up with some Aussie beer posts as well. Be sure to check back for more, or subscribe to my RSS feed to receive updates automatically to your reader. 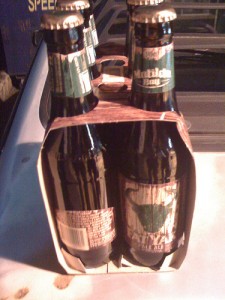 From the people who brought you Beez Neez, the Matilda Bay Brewing Company provides Australians with yet another great named (and tasting) beer – Fat Yak. Fat Yak has become one of my favorite beers down under, and I’m always a bit excited when I find a pub that has it on tap because then I know I can take them seriously. It goes without saying that I’m also saddened when a pub decides to take it away (pub across the street, why?).

I was pleased to see that there are a number of microbreweries around the country that are putting out unique beers in fun flavors, or at least a step above the standard VB or Tooheys drunk by the masses. Hey, you can always expect to get a cold brew in Australia, but the standards just don’t cut it for me nowadays – perhaps my tastes have matured with age?

Fat Yak is known for having a North American pale ale style, which could be why I enjoy it so much. Or, it could be because of the slightly fruity flavors presented while drinking that are followed with a hop empowered finish. I’m getting thirsty just writing this.

My tip: Enjoy a nice, cold Fat Yak this New Years Eve. I know I will!

The Matilda Bay Brewing Company is also responsible for creating Beez Neez, Redback and Alpha to name a few, so it goes without saying that I wouldn’t mind having a nice tasting session with the beers only from this company. They are based in Victoria nowadays, but were originally started in Western Australia.

Do you enjoy a Fat Yak? If so, let me know, and maybe we can enjoy one together in Sydney.