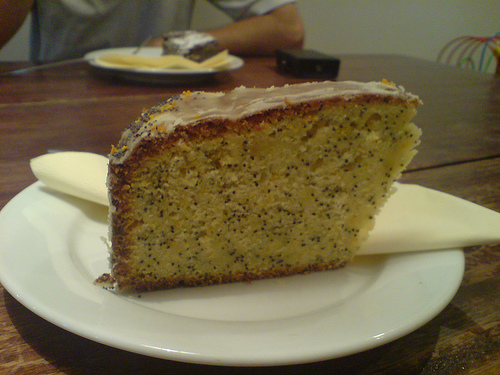 Mornings from when I lived in America were filled with choices for muffins – everything from chocolate chip and blueberry to lemon poppy seed. Yes, the latter was my favorite, especially those giant ones from Perkins coated in a thick layer of cream cheese icing (*drools*). They are definitely not healthy in any way, shape or form, but they sure do taste good.

I remember my college years having set days where I would allow myself to pick up a lemon poppy seed muffin from the union hall bakery, which was then picked at throughout my Italian classes. It’s a flavor combination I will always enjoy, but here, in Australia, they don’t do lemon. Orange poppy seed is "the norm", and while it’s not bad, it’s just not the same.

I find myself being made fun of when I mention lemon. The Aussies say that it’s just not right.

Isn’t it amazing how much of what we love food-wise is shaped by the way (and location) we are raised? I mean, seriously, Australians love Vegemite, so that has to say something. But, with this example, the difference between orange and lemon is minute… they’re both citrus fruits, and they both make for great poppy seed cakes. I actually like orange poppy seed, but the idea that they don’t offer lemon (at least as often) makes me a little bit sad inside.

I put a little poll out on Facebook recently and the responses from North Americans were that they wanted lemon poppy seed, while Australians wanted orange.

Where are you in the world, and which flavor of poppy seed cake do you prefer?