Search for cheap flights to Brisbane Airport using the tool above. 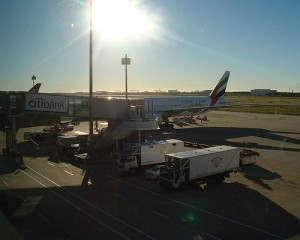 Catching an international flight to the Brisbane Airport (code: BNE) is a lot less common than flights to Sydney or Melbourne even, but there are definitely a few to choose from depending on your country of departure. Even so, the possibilities are on the small side given the fact that Brisbane is the third largest city in all of Australia. Your best bet is generally to fly into Sydney or Melbourne and get a budget domestic flight to Brisbane.

Direct Flights to Brisbane From:

The Brisbane Airport is located to the north of Brisbane, just a short 15 minute drive to the Central Business District (CBD), which can end up being a bit longer if during high traffic times. Once you arrive, there are several ways to reach the city, including buses, taxis and even Airtrain. Airtrain offers direct train to the CBD every 15 minutes during peak hours, and even a direct ride to the Gold Coast.

How to Find Cheap Flights to Brisbane

With the Brisbane Airport being a less popular destination, the flights to this airport are probably going to cost a bit more since there are less options. Most of the time, you will find that getting a flight to Sydney (or Melbourne) and then choosing a flight on a budget airline to Brisbane will suffice.

However, if you are not looking to transfer planes another time, looking for flights in the off-peak time of the year (Australian winter) and off-peak days of the week (mid-week) can result in lower prices. The Australian winter occurs in June, July and August, but even though the term “winter” is used, it should not put someone off from traveling to the land down under. There’s just as much sun to go around, and it is actually the best time to get to some of the more tropical locations in the country.