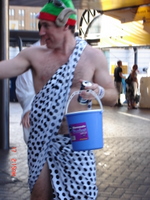 If you are in Manly this weekend- here is where you need to be! An opportunity to dress up, run around with a couple hundred other crazy folks, drink beer and raise money for charity… what more do you need! I’ll be there if anyone cares to meet up! Never mind Christmas Day, the best fun you’ll have this year is at the SANTA CLAUS PUB CRAWL !!!!

What is the “Santa Claus Pub Crawl”? Basically everybody gets dressed up in Christmas costume (e.g. Santa Claus, Mrs Claus, reindeer, elves etc) and we visit several of the fine drinking establishments in Manly spreading Christmas cheer. Apart from raising money for charity, it is a guaranteed good time and over the years has attracted the reputation as one of Manly’s premier social events. Check out some of the photos from previous years’ crawls.

Come and see me, make a donation to Stewart House and receive your Santa wristband as well as vouchers for free beers, wines and pies you can use at the various pubs/clubs/eateries on the night (first in, best dressed)
Raffle tickets will also be on sale You can use your first FREE drink voucher here From the Wharf Bar, we will make our way slowly down the Corso stopping at:

Santa loves the boatshed, especially when he can get two drinks for the price of one using the voucher he picked up earlier when donating money to Stewart House.

3. Ivanhoe Hotel
The Ivanhoe is putting on FREE finger food for Santa and all his helpers.

4. New Brighton Hotel (Shark Bar)
Santa and all his helper get half price cocktails at the Shark Bar

5. Cerutis
FREE entry for Santa and his helpers- just show your Santa wristband, and try to be there by 11pm

No pub crawl in Manly is complete without a visit to the Steyne, and we’re hoping to slip in a visit to this fine establishment at some point during the night. Negotiations with the management are still taking place, so watch this space!

Where to Get Your Santa Suit?

” Patrick’s Variety” and “Manly Beach Variety” on the Corso have santa suits for less than $10!. I’ve even seen them for $5 or $6 at other discount variety stores such as “Hotdollar” at Warringah Mall (they even had Mrs Claus dresses!) You can also get santa suits and other Christmas paraphernalia from most department stores (such as Big W, K-mart, Target, David Jones, Grace Bros) as well as shops such as Mansours and Lincraft. Of course, you may prefer to come as Mrs Claus, or even a reindeer, elf, Christmas present or Christmas tree!, but whatever you do make sure you get into the spirit of the occasion. It’s a lot of fun, and all money raised goes to Stewart House ( www.stewarthouse.org.au )

How does the Pub Crawl raise money? Money is raised through the donations of those people attending the pub crawl as well as from other patrons of the hotels and members of the general public. The hotels and some of the local businesses also contribute by either donating money or supplying us with a few free beers or pies etc to help us on our way during the pub crawl. We also “sell ” various bits of Christmas paraphernalia such as Santa hats, reindeer antlers and Christmas ties. We’ll probably organise a raffle or something too- do you know of a business that might donate a prize?

How does the community benefit? All money raised by the event is donated to Stewart House, a local charity based in Curl Curl which helps disadvantaged children from all over NSW and the ACT. It helps children suffering from ill-health, children who have recently experienced a period of sorrow or loss, and children who are victims of poverty, neglect, or isolation (for more information on Stewart House Let ‘s make it another fantastic Christmas this year for everyone, including those who are less fortunate than ourselves.

How can YOU help? Get all your friends together, get dressed up in Santa or other Christmas costume, and come and join in the fun of the Santa Claus Pub Crawl!