The Truth About Ugg Boots: History, Controversy & Who Wears Them 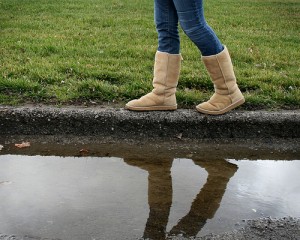 It is winter in Sydney right now, and that means that heaps of people are walking around (in public) in ugg boots in different shades of beige. Since you’ve most likely seen these types of shoes grace the feet of certain Hollywood stars in the past decade, such as the Olsen twins and Cameron Diaz, you probably won’t be too shocked about the amount of people that choose these as more than just slippers. However, you might be shocked to find out the story behind the ugg and its name.

If you ask any Australian person about ugg, they will simply tell you that the word itself is as Aussie as pavlova [1]. Ugg (or ugh, ug) simply referred to a type of shoe that was made with wool inside and sheepskin outside, much like the word “clog” refers to another style of shoe.

The History of Uggs

Apparently uggs have been around in Australia (and New Zealand) for some time. Their wool insulation has a way of keeping the foot at body temperature and dry, so no matter what season it is, your feet will be as hot or cold as you can comfortably expect. It is said that pilots wore them in World War I when the planes were freezing, and they made a roaring come back with surfers trying to keep their bodies warm outside of the water in the 70s. Uggs became a fashion trend around 2000, especially when they hit the American scene. 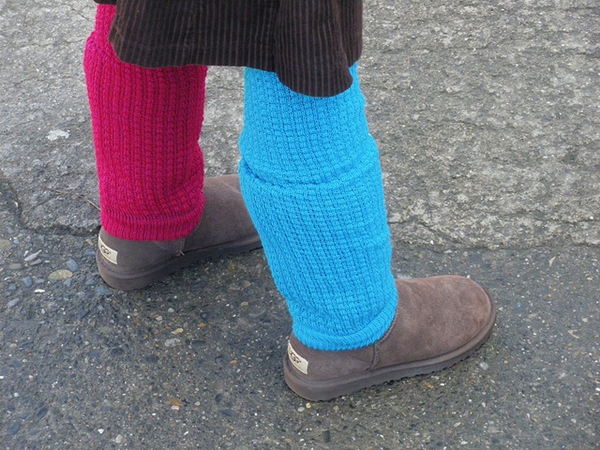 The controversy about uggs began when a trademark for the ugg name was picked up by an American company. Although not initially enforced, when it came to Internet sales of uggs, the Australian companies were not allowed to trade with “ugg” in the name since “ugg” in America was known as a brand, and not a household name.

Another controversy was sparked when certain celebrities started a ban on the boots when they realized it was not only sheep skin involved in making them, but also sheep skin that was obtained through mulesing. I did some research on the process of mulesing, and it is definitely not pretty, but the alternative is probably a bit worse. Without mulesing, a common practice in Australia to protect sheep stock, the skin areas of the buttocks can become infected from flystrike, which allows for maggots to grow and infections – often deadly – to ensue. I won’t go into details, but it has been found that mulesing helps to remove the vulnerable areas.

I have a friend that had bought some Australian ugg boots for a girlfriend that no longer wanted them. So, he decided to sell the boots online, which is where an American woman became the highest bidder. However, a problem ensued when she actually received the boots as they were not the “uggs” she was expecting (read as the brand name Uggs). Hoping she would be sporting the boots as a status symbol in America, she complained and wanted a refund.

This is when my friend had to explain to her that “uggs” in Australia are a generic term for a style of shoe, and also that these “uggs” were the real ones since they were actually made in Oz. 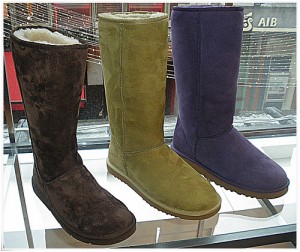 There are plenty of places in Australia that sell cheaper, synthetic, versions of the ugg boot. To be honest, I have pondered many times purchasing a pair of my own, at least for warmth around the house. But, the true benefit of the ugg style boot is the use of wool inside that actually helps your feet to stay at a steady temperature. The synthetic may just make your feet sweaty – anyone?

You can buy knock-off uggs at just about any clothing shop at the mall including Myers and Target. Online stores also sell uggs.

Where to Buy Real Uggs

Ugg boots are seen as a very Aussie thing, so they are often sold in Australian souvenir shops or very touristy areas in hopes that travelers will take some home with them. Besides these locations, they can also be found online, or in classier retail stores in shopping malls. 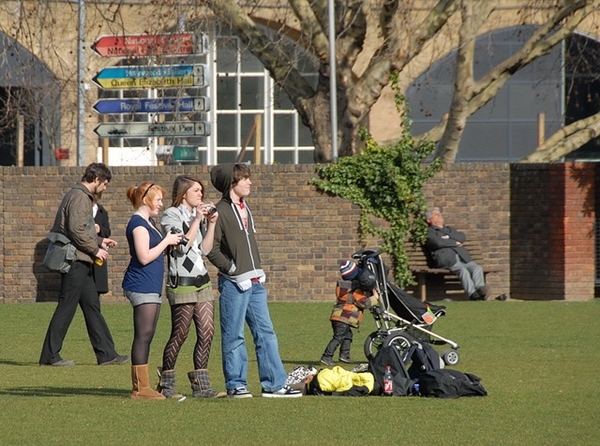 Ugg boots in Australia appear to be particularly popular with the young females who will wear them out to the shops and then some. However, it is not uncommon to see them worn by males and females, and apparently surfers like them for when they get out of the water. Some people prefer to take them out camping and wearing them in more rugged situations. A good pair of ugg boots can last you a long while if taken care of properly.

[1] I was trying to make a joke as both pavlova and ugg boots can be argued as being first from New Zealand.

If you found this post, chances are you enjoy shopping! Check out this post about cheap clothing stores in Melbourne.