You could definitely find yourself driving for hours in Australia… and then driving for hours more without hitting a major city along the way. The little towns could easily be overlooked, and the people living and working there needed a way to draw these passers-by off the road and to their shop, stand or restaurant. That’s where the “big things” came into play.

Australia is home to over 150 “big things” that include everything from a big mango to a big lobster. These giant roadside attractions do their job of getting people to the area, and at least stopping for a good photo or two of themselves with the giant item. Although I’d love to give a run-down of all of these “big things”, I’m afraid that would take up the majority of the day, which is why I’ve scaled the list down to a reasonable 9. 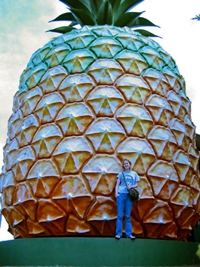 The Big Pineapple is more than just a giant addition to a travel photo.

It is the landmark for a stop-off in Woombye, Queensland that also features pineapple plantation tours, train tours through macadamia plantations, an animal nursery full of emus, kangaroos and wombats, fresh food and baked goods, and even a location for various functions and events.

There’s even art, jewelry and other forms of souvenirs available on-site.

The Big Pineapple opens everyday at 9am, and be sure to bring some extra cash so you can take some of those fresh fruit preserves, or macadamia nut cookies, away with you! 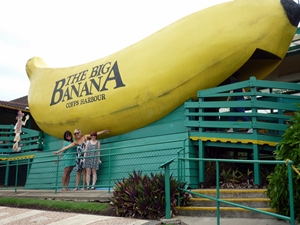 The Big Banana is similar to the Big Pineapple in the way that this landmark is representative of what is grown in the area. It turns out that John Landy simply wanted to build something big on the side of the road to draw visitors to his simple banana stand back in the 1960s. He definitely succeeded as now the site is home to a restaurant, banana plantations, a toboggan ride, a water park, a place to ice skate, as well as a cafe and gift shop.

The Big Banana is open daily from 9am to 4:30pm, and entrance is free for everything except the attractions. It’s easy to find as well being right on the Pacific Highway. 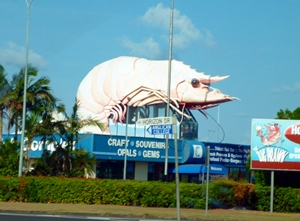 The Big Prawn is located in Ballina, New South Wales just on the Pacific Highway. However, this beloved big thing of Australia has seen better days. In fact, there were many talks in the past years over the cost of upkeep by the owner, and it appears that 2010 has meant the prawn is left alone. The shops under this iconic symbol have gone out of business, and the future of the prawn is up in the air. So, if you have the opportunity to see the prawn sooner than later, be sure to act on it!

The Big Banana and the Big Prawn were submitted by Lauren Nicholl. 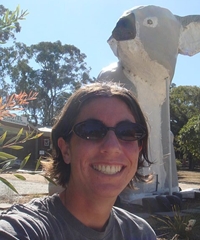 The Big Koala is located near a koala sanctuary, hence this “big thing” being placed where it is just between Cowes and San Remo on Phillip Island. It is the perfect opportunity for a truly memorable photo petting a koala in Australia.

Apparently, there’s even a nice, big sign to remind the passers-by to not take the opportunity to climb on top of it, no matter how enticing that might be.

This Big Koala is not to be confused with the Giant Koala located at Dadswells Bridge. That one reaches 14 meters high, is made of bronze, and weighs in at 12 tonnes. 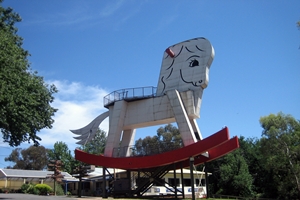 The Big Rocking Horse is located no other than at the site of a toy factory in South Australia. It was opened in 1981 and reaches just over 18 meters tall, which helps it do its job of attracting the attention of individuals driving along the highway.

One cool thing about the Big Rocking Horse is the fact that you can climb up to the viewing platform on its back either before or after having a coffee in the cafe. 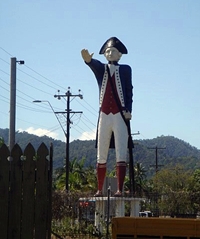 The Big Captain Cook sits in Cairns, Queensland in probably more of a weird location. It used to be part of the Endeavour Inn, but that is gone while the Cappie himself still stands.

There has been talk about possibly relocating this “big thing” to Cooktown since that would be more representative of the location where Captain Cook himself made land in Australia. It is also the location of the annual Cooktown Festival that re-enact that event.

The Big Koala, the Big Rocking Horse and the Big Captain Cook were submitted by Rebecca Several. 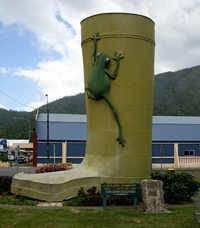 The story of the gumboot comes from the annual contest between Tully, Babinda and Innisfail to see which one is the wettest place in Australia. Every year, a rubber boot is awarded to the winning town, but Tully decided to take it one step further and just install a big gumboot right in the town.

For those interested, there is also a viewing platform in the boot to allow visitors to look out over the rainforest and banana plantations in the area. 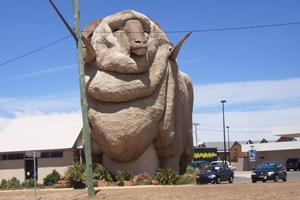 The Big Merino sits in Goulburn and towers at 15 meters in height off the Hume Highway. “Rambo” contains a gift shop on the ground level, and a wool display at the second level. At one time, there was the ability to go up to the top and look out through its eyes, but that is now closed to the public.

“Rambo” is officially known as the biggest merino in the world.

Photo submitted by Debbie Ellis; photography of a friend. 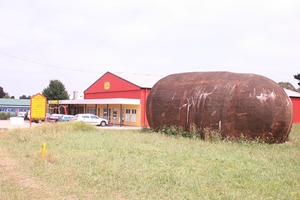 The Big Potato doesn’t look like much of anything really, and it is often referred to as the “big turd” among other things. However, it does show exactly what the area is popular for – growing potatoes. Robertson, NSW became home to the unsightly Big Potato in 1977, and it has caused much controversy for the people of the town since. There was actually an interesting event that happened in March of 2010 where unknown people put a face on the potato, bringing much joy to people in the area, only to have it torn off the following night. Many people are actually calling for the fun face to be put back on the potato, so keep your eyes peeled.

It is not uncommon for travelers to make it a big adventure of going around Australia to visit these famous roadside attractions. You can read about Danny Wallace’s big adventure for inspiration, and then rent a campervan and head out on a similar trip of your own.