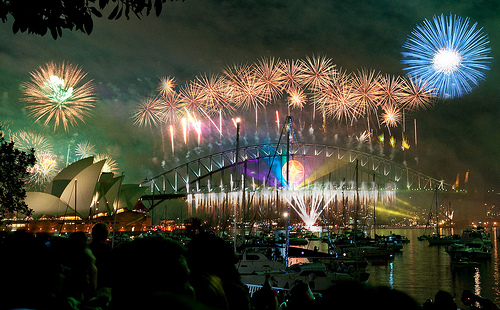 Planning on ringing in the New Year in Australia? You’re not alone! The holiday season is a very popular time to catch a cheap flight to Australia and celebrate, especially because of its hot summer weather.

Just imagine not having to bundle up in your winter hats and scarves to watch a few fireworks out on the balcony. Not in Australia. New Year’s Eve turns into something that more resembles the Fourth of July – a summery, outdoorsy type of gathering that will more than likely leave you a bit on the sweaty side.

New Year’s Eve is a big event in most Australian cities, with the biggest being that in Sydney (of worldwide fame no less).

The Sydney fireworks extravaganza starts at the stroke of midnight and takes place on the famous Sydney Harbour Bridge. There are lights, music and swarms of people everywhere. Australians everywhere will be watching them, either on television or from one of the spectacular vantage points across Sydney. Just be warned: those that want to view the event from the best spots will often have to camp out all day.

This event is said to be one of the largest in the world. Each year there is a different theme for the display, and the added use of lighting effects on the Harbour Bridge makes it that much more interesting for viewers.

There are also a number of parties around the city to partake in at different bars and clubs. Some host all night events that include a cover charge and/or tickets.

In Melbourne, the celebration is almost just as big. There are family gatherings across the city and a huge fireworks display to paint the sky with color. Clubs are an alternative party idea for those looking to stay out to all hours of the night.

Besides these events, New Year’s is a time for travel, relaxation and just getting away. The majority of Australians will still be on vacations that started before Christmas. If you are planning on coming during the holiday season, be sure to book your accommodation in advance since this is now the busy season. Also, feel free to drop by our Facebook page and let me know when you’re coming so I can give you some pointers.