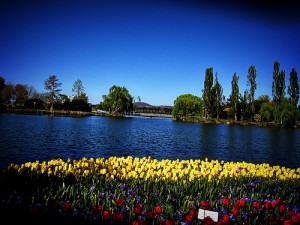 It’s just one of many, many flower and nature festivals that are out to kick-off the spring season in Australia. Floriade takes place annually in Canberra, the nation’s capital city, and is the largest event of its kind in the country featuring glorious beds of flowers, live entertainment and art, such as sculptures, throughout. The festival brings tourists in from all over Australia and runs for an entire month from the middle of September to the middle of October in Commonwealth Park.

Each year the Floriade has a theme, such as Imagination, Rock ‘n’ Roll, Carnival and the Heavens in Bloom. There is even a gnome decorating contest each year that often results in gnomes in the theme of the event.

Floriade also includes live concerts, fashion shows and gardening tips. NightFest occurs each year for a few nights and may include spectacular light shows with acrobatics or comedy. NightFest wouldn’t be complete without food, drink and Djs.

Types of flowers on display include hyacinths, tulips, daisies and daffodils to name a few, and the mass of flowers can cover a 9000 square meter area in the park.

If you’d like to explore Floriade, it makes for a great weekend away. To get to the event, you can simply hop on a budget airline to Canberra, which is the quickest. If you’d prefer to drive a rental car, it takes around 3 hours to get to ACT from Sydney. Trains are another possibility getting you there in about 4.5 hours. Several great Canberra hotels can be found using our booking widget below.