The City2Surf Fun Run in Sydney 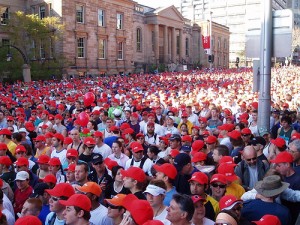 The 2010 City2Surf is about to take place on August 14, 2011 in downtown Sydney and its surrounds! Be aware that many streets will be blocked off, and public transportation will be inhibited in areas where the race will occur.

The City2Surf race began in 1971 with a mere 2000 participants in Sydney. It is sponsored by The Sun-Herald and has since grown to a massive number of 65,000 contestants ranging in ages from youth to seniors, and in 2008, it was able to raise $1.25 million to give to charity.

The race goes for 14 kilometers from the Sydney central business district to the finish line at Bondi Beach. During the race, it passes through William Street, Kings Cross and Military Road until it reaches the famous beach.

City2Surf gives runners the ability to raise funds through a fund raising page for a charity. The Sun-Herald has also been known to award certain charity groups with large sums of money in light of the event. Each event is known to raise well into the million dollar range in most recent years.

Many serious athletes do choose to participate in this event, and the fast runners are usually given preference for an early start. However, participants need not run as the race is known as a “fun run”. They can walk if they want to, and some even choose to dress up for the event.

The fastest time ever was 40:03 in 1991, and even though many have come close, it is a time that is yet to be beat. Serious runners from all over the world come to Sydney to participate in this race, which is known as the longest timed road race in the world.