Flying to Australia: choosing the route & other tips 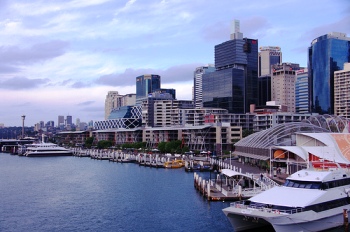 Australia is a very popular vacation destination and many travelers who live in the Northern Hemisphere prefer to visit Australia when the weather starts to get cold in their home country.

On the other side of the globe, October marks the middle of spring and the weather is excellent for exploring both the cities and the surrounding areas. Also there are plenty of cheap tickets to Australia available during this time of the year.

Shortest route between the US and Australia

The shortest route between US and Australia is from Los Angeles (LAX) to Sydney (SYD). The flight duration is about 14 hours 45 minutes and you don’t need to make any stops along the way.

Los Angeles is served by several airports but the largest and busiest is LAX. It’s a major gateway into the South Pacific area and is hub for United Airlines .

Finding a cheap flight between cities located on two different continents is always a bit tricky. There aren’t many airlines offering the seats so the competition doesn’t exactly keep the ticket prices very low. And you should also remember to book your flight in advance.

>>make sure to check out these cheap ticket links to get you started.

Places to stay in Sydney

With the flight secured, it’s time to look for a place to stay in Sydney. Cheap hotels in Sydney are easy to find especially during this time of the year. Sydney is a big city with many neighborhoods so you can easily avoid the central area and save on accommodation. Just make sure to read about the neighborhood before you book the hotel. Kings Cross is a cheap area but is part “red light district” and part interesting cafes. North Sydney is mostly residential so you’ll be staying in a quiet area.

What to expect: the weather & events

Mid-spring in Sydney is characterized by sunny days and temperatures averaging 19C/62F during the day (and 11C/52F during the night). But just like any spring days in a temperate climate, it can be warm, cold or just pleasant. It’s a good idea to bring a jacket and you might want to throw a t-shirt or two in the backpack as well. It’s not warm enough to swim though.

October in Sydney is festival season! The first weekend marks the NSW Labour day holiday when concerts are held in different locations, there are horse races to watch and many parties to attend.

October is also the Good Food Month and during the entire month there are cooking classes at hotels, and the night noodle markets in Hyde Park.