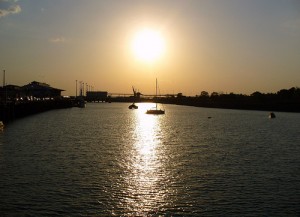 Darwin is located in Australia’s Top End in the Northern Territory and acts as a hub to nearby Asia. With only a little over 120,000 people inhabiting the city, it is definitely one of the smaller capital cities in the country, but it still holds the majority of the population for the entire Northern Territory. Darwin has an eclectic mix of culture and a vibe of big-city living in a smaller area.

Darwin is located just on the Timor Sea near the top of the Northern Territory. It is around 4000 kilometers from both Perth and Canberra, but less distant from Singapore, Indonesia and Papua New Guinea. The proximity to Asia makes it a good port and hub between it and the rest of Australia.

How to Get to Darwin

The easiest way to access Darwin is by airplane since it so far away from most other major areas of Australia. Driving can take an extremely long time, and would only be suggested if traveling for an extended period.

By plane, you can get from Sydney to Darwin in around 5 hours. Search for flights to Darwin (DRW) from Sydney (SYD), Melbourne (MEL) and Alice Springs (ASP) using the widget below.

By car, Darwin can be reached by driving the Stuart Highway that runs through to South Australia. Rent a car >>

Darwin can be reached by train via the Ghan that originates in Adelaide and runs through Alice Springs.

By bus, Darwin from Sydney would take several days with quite a few stops (Adelaide and Alice Springs).

Darwin has a tropical climate that stays fairly warm throughout the entire year. The wet season brings much rain and humidity throughout the region, making it practically unbearable at times, while the dry season, which occurs during the winter, has little rainfall. The wet season is known for heavy storms, cyclones and lots of lightning.

The maximum temperature during the year is in the 30s (Celsius), but the humidity levels varies depending on the seasons. The lows can dip into the teens in the winter, which can lead to chilly nights.

The outdoors is a thing to be enjoyed near Darwin. You can choose from beautiful beaches, great fishing spots, national parks and wildlife to keep you entertained up north.

Mindil Beach is a popular spot for locals and tourists alike to hang out and enjoy the night markets that occur throughout the dry season. It is not advised to swim throughout the dry season as the waters are more likely to contain the box jellyfish, which can be deadly. Saltwater crocodiles are also a threat at times on the beaches and waters of the north, so be wary.

Litchfield National Park is a popular destination from Darwin. It has a beauty all its own with waterfalls and vegetation throughout. It is only about 130 kilometers south of Darwin.

The Wharf Precinct is a great place in town to shop, dine or have a night out. Choose from great restaurants and cafes, or simply just relax in the fresh, open air.

Plan a Trip to Darwin