Australia’s New PM & How We Got Here 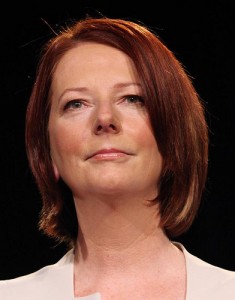 In one night, Australia went from having a chance in the World Cup with Kevin Rudd as Prime Minister to being sent home from South Africa and having the first female take control of the country. It all happened quite abruptly (the P.M. part of that statement), and to many people – both Australian and foreign – it came as quite a shock.

On the night of June 23, 2010, it was announced that Julia Gillard was to challenge Kevin Rudd in the following morning. What? Challenge the Prime Minister? As a foreigner that is typically bored by politics, I had no idea what that meant.

Apparently, in Australia it is accepted for one person of a party to take over the role as the PM overnight by calling an election by the party. It is pretty much like a reorganization attempt by the party, or a “bloodless coup” as it was often called. And, this is when everyone would like to remind you that you voted for a party and not really a person, which is confusing since it is the PM candidate that is advertised.

>> Read about the bloodless coup

So, it was announced at night that the vote would happen in the morning, and that’s when Julia Gillard became Australian’s first female Prime Minister as Kevin Rudd resigned instead of going through the voting process. Gillard’s motives for the coup were to help the party maintain its intended path.

Since then, Gillard has called an official election (one that was to eventually come, but would be more advantageous sooner), and that’s when the short weeks of interesting political commercials hit the TV talking about Gillard’s trustworthiness and Abbott’s shocking comments.

The election happened on August 21st, and shockingly it resulted in a hung Parliament.

>> See the election day in photos

Over the coming weeks, it came down to who the Independents would back to make the big decision. Offers were proposed and deals were made, and it eventually resulted in Gillard taking over with a 76 to 74 vote.

>> Read about the Independents backing Labor

Julia Gillard is now the official Prime Minister of Australia for a term of 3 years… unless of course the party decides to reorganize yet again.

>> Learn more about Julia Gillard in this Reuters profile