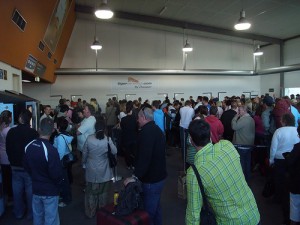 As if all the drama over the past week or two wasn’t enough, it turns out that a new ash cloud may well be on its way to the east side of Australia from the country’s southwest.

I was recently traveling in the USA where I heard a glimmer here and there about ash cloud causing issues over in Australia and New Zealand, but my flight back from San Francisco to Sydney wasn’t affected (no, that was another issue that delayed my flight).

But, I arrived back and have been hearing and seeing updates everywhere about the unruly ash cloud from the Chilean volcano and flights being grounded. And, if that wasn’t bad enough, there’s word that another ash cloud, one that starts at the surface level up to 20,000 feet, is heading towards Australia’s east. This one won’t let airplanes fly at a lower altitude to bypass it.

Currently, there are several disruptions involving travel to Tasmania, Perth and New Zealand, but you should be checking your flight statuses regularly.

If you are a traveler that is impacted by the disruptions, I suggest looking into alternate modes of transport (if possible) to get to your destination. There are great long-distance bus services and train transport to consider, and renting a car is another option. If heading to Tasmania, why not take a ferry from Melbourne (check out the post on getting from Hobart to Sydney). Otherwise, some good Australian hotels might become your friend for the next several days.