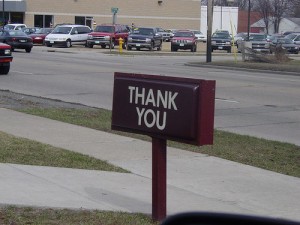 I guess the people I hang around with in Australia don’t ever use this slang because the very first time I heard it, I thought it was a mistake.

I was at my favorite coffee joint near my apartment, and the baristo is from Hong Kong, so sometimes he doesn’t speak English clearly. When he handed me my coffee and my grub one day, he muttered a “ta” in response and then turned on his way.

To be honest, I thought he was saying something in Chinese.

When it happened again, I asked my boyfriend what he was saying, which is when I discovered “ta”. Ta means “thanks” or “thanks a lot”, shortened to a one simple syllable word to be thrown around when necessary. Thanks clearly takes too much time to say on its own.

Really? Is there anything the Aussies won’t shorten? (see this article on adding an “o”)

Now, since that first encounter, I have been hearing “ta” just about everywhere: at the shops, at restaurants and on TV. I’ve even heard a little toddler throwing out the slang word to his parents.

I still don’t think it is a bit of Aussie slang I can work into my personal vocabulary. I prefer my “thanks” and “cheers” on most occasions, and “cheers” was one that took time on its own.