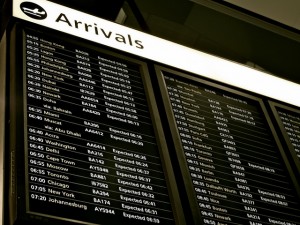 I saw a conversation the other day on Twitter that had me giggling while I read it. Heather, an American friend of mine, was discussing how her parents’ flight to Australia had been delayed. That is when an Aussie friend, Adam, made the comment:

You see, in Australia, you don’t arrive; you simply “rock up”. While this might not seem too funny to you, the idea of Heather’s parents rocking up made me giggle as I most often associate the term with a non-parent-y sort of crowd. I think Heather also thought it was funny as per her somewhat sarcastic response above.

“Rock up” is also a term used to described arriving especially at an unexpected time. So, in the Twitter example above, Heather’s parents are “rocking up” at an unknown hour because of the delay.

“He rocked up at my house at 6 am and wanted me to go for a coffee!”

It definitely doesn’t have to refer to an unexpected time-frame, but it is good to know of this connotation if you’re looking to speak and understand the Aussie language like a local. It also helps to practice before you rock up in the country!

This is part one in a series of my favorite Aussie slang. Be sure to check back, or sign up for my RSS feed to get updates immediately to your reader!