This post is part of a series on my favorite Australian slang. Be sure to check back for more, or subscribe to my RSS feed to receive updates in your reader automatically. 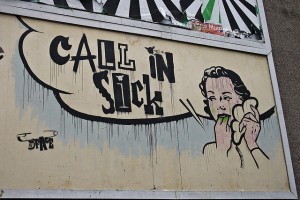 Before reading on, do you know what the Aussie slang “chuck a sickie” actually means? I’m sure you can come close if you think about it, and I’m sure you’ve probably done it once or twice in your working life. It’s okay; I won’t judge. Sometimes we all just need a little extra time to ourselves.

If you haven’t guessed it so far, to “chuck a sickie” means to take a day off work when you are actually healthy. Going through with this action can be caused for various reasons: you need a personal day, you stayed out too late the night before, or perhaps you just don’t like the people you work with. Whatever the reason, it is an action known to workers all around the world.

Leave me a comment below telling me why you’ve chucked a sickie before!

Chucking a Sickie Before a Holiday

Chucking a sickie before or after a big holiday seems like the best way to see a return on your risky investment. The Australian people are no strangers to this tactic. I came across an interesting blog post when researching this slang that talked about the projected amount of people who would chuck a sickie on the day before Australia Day, and the day after. The estimates were huge, with nearly 500,000 people expected to do so on the day before, and 100,000 expected on the day after.

Supposedly, a successful campaign by DHS helped to lessen the expected numbers by 18% the day before, and 20% the day after.

Would you chuck a sickie before or after a holiday, even if it looks obvious.