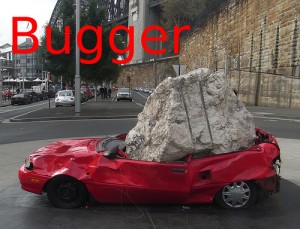 Bugger is a word that is quite often thrown around in the Aussie language, and can be used in various contexts to cover a wide range of expression needs. The main “oh, bugger” phrase is often used to show a bit of disappointment.

In another sense, the word “bugger” can be used to refer to a person in an endearing sort of way, or in the exact opposite when you want to call someone a bastard.

Bugger-all is a saying that has bugger in it, used to say that there is not very much of something. “My grandfather was rich, but he gave us bugger-all.”

You can tell someone to “bugger off” if you are angry and want them to leave, or this phrase can be used to just talk about something passing quickly. “The mouse buggered off behind the couch.”

Are you surprised about something? You know the saying, “Well, I’ll be a monkey’s uncle.” It is used to show that you don’t believe something to be true. In the same sense, you can say, “I’ll be buggered.”

When you’ve had plenty of exercise or a long day at work, you don’t want to do anything. At this point, you’re buggered, meaning exhausted.

“Buggered if I know” is pretty much the same as saying, “Heck if I know.” It means that you have no idea about something.

Last, but not least, there is “buggery”, a place that I’m assuming is sort of like Hell. The phrase, “He can go to buggery for all I care,” pretty much sums it up.

Is there a meaning or a use for bugger that I missed here? Let me know in the comments!