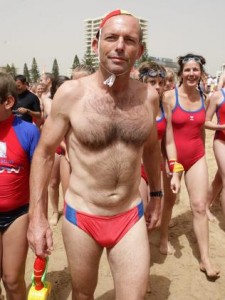 Tony Abbott is so well known for wearing budgie smugglers when he does his iron man and training events that he actually came up at the top of Google when I ran a quick search for the term. Apparently, it is considered newsworthy when he decides to choose a wetsuit for a competition instead of his typical tiny swimmers.

Now, to get the full meaning of the term, you must know that “budgie” is actually the short form for “budgerigar”, a type of small parrot that lives in Australia and is often kept as pets. So, the budgie smugglers are called so because it supposedly looks like what it would if someone stuffed this small bird in their pants. I’m not sure how anyone ever decided that was a good phrase for it. Yes, Australia, you make no sense to me sometimes.