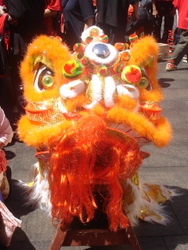 Bang! Bang! Clang! Bang! Whee! If anything can be said about the Aussies, they love to have a good time! Chinese New Year is coming up in a few short weeks and seems to be yet another amazing reason to party, get outdoors in the capital cities, eat some great food and watch live entertainment. Sydney hosts the biggest and most organized Chinese New Years Festival with over 500,000 people expected to take part this year! running from February 9th through April 4th, many parts of Sydney and other cities will be alive with the color, movement, sounds, and a taste of the orient. Don’t miss the official Launch on 9 Feb! Sydney’s Chinatown and adjoining Darling harbour will host Parades ,Markets , Dancers , Dragon boat races , film festivals and art exhibits.

Melbourne probably has the second most organized celebration. The Victorian Capital will have Buddhist blessings and Karaoke competitions along with parades to help ring in the Year of the Pig.

Chinese people first came to Australia in large numbers during the Gold Rush in the 1850s and 60s – about one-third of the miners were Chinese – and many Chinese-Australian families can trace their settlement in Australia to that time. Monuments and buildings developed by Chinese settlers serve as reminders of the long history of Chinese immigration to Australia.
Chinatowns in Australia:

Watch out for the Fire crackers that bring in all of that good luck! Protect yourself with Travel insurance!
Need to Get to Sydney to see all the excitement? Here’s a link to cheap international plane tickets