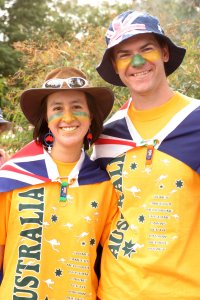 January 26th strap on your Green and Gold, grab a flag, face paint, a slab of beer and head to the beach! You won’t be able to go to the bank or any other business. Why? It’s Australia Day Baby! Australia’s closest thing to a birthday, it marks the day that the first fleet under Captain Arthur Phillip arrived in Sydney Cove and set up the colony of New South Wales.
BBQ’s, beach outings, fireworks, and all kinds of celebrations take place all over the country including the much anticipated music events of the year- The JJJ Hottest 100 Release and the Sydney Leg of The Big Day Out concert. The Hottest 100 list is a compilation of the biggest hits of the year as voted on by JJJ listeners- which is most of the country.
Along with the fun and frivolity of a National-day-off-work-holiday that falls during the summer school holidays, other more official events like Australian of the Year, a Prime Ministers Address and Citizenship ceremonies also occur.
But most importantly (he he he) is the Thong World Record I’m going to try and help set.
(Update: We only managed about 540 people at Dee Why this year….I think the record is somewhere over 900. Come on people let’s show them next year!)