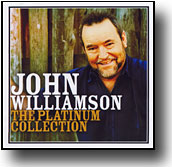 During the Tamworth Music Festival last January I had the great pleasure of going to watch John Williamson perform. I knew absolutely nothing about him other than a friend of mine had bought the tickets. I was thoroughly enchanted. Watching him on a big stage with nothing more than a chair, guitar, and his “campfire,” the crowd was completely transfixed for over 2 hours. This man is a True Blue, Fair Dinkum Australian Performer. More balladier than just singer- each of his songs is a complete story about a facet of Australian life.
If you really want to learn a few things about what it means to be Aussie, definately give his songs a go. Not rock, not country, just really good musical story telling, his tunes are catchy and memorable. His Old Man Emu had me in stiches. He sings about koalas, aboriginies, the Outback, the human condition, love, travel, and most importantly, this great big sunburned land.
Here is an excerpt from his website:
With more great songs than is fair for one man to have written, John Williamson has followed his heroes, Banjo Paterson and Henry Lawson, in helping to define the Australian character….
He’s an entertainer. An evening with JW around his stage campfire is to be captivated by a born storyteller. Every song is a story and every song has a story behind it – which is sometimes as entertaining as the song. He’s played a string of characters over the years that bring an added element of fun to a concert, but he can also make you cry or make you think.